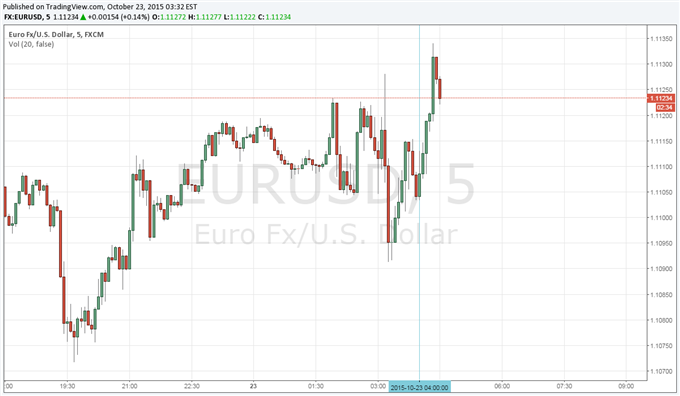 The Euro rose slightly versus the US Dollar after today’s Flash Markit Eurozone PMI said the European economy regained some momentum. The Eurozone PMI Composite Output Index came at 54.0, above the 53.4 expected by economists, and above the 53.6 in September, marking a two months high. The Services PMI Activity Index rose to 54.2, above the 53.7 in September. Manufacturing PMI remained unchanged at 52.0, but the Manufacturing PMI Output Index dropped to 53.3, below the 53.4 in September, marking a five months low. Eurozone PMI describes services and manufacturing conditions in eight countries: Germany, France, Spain, Italy, Ireland, Greece, Austria, and the Netherlands. A reading of less than 50 indicates a contraction of activity, above 50 points to an expansion, and an index of 50 says that no change has occurred.

Markit remarked that the latest reading remained slightly below August, yet signaled one of the strongest monthly expansions seen over the past four years. The market seemed to have interpreted the numbers as positive, subsequently leading to a slight rise in the Euro, perhaps on the closing of short positions from yesterday. With that being said, Markit further commented that unless the PMI business activity and price indices pick up in coming months, the relatively weak growth and deflation signaled by the survey will add to expectations that the ECB will step up its quantitative easing programme. The survey comes after Mario Draghi’s press conference yesterday, in which he said that the ECB pondered expansion of QE and had a discussion about cutting deposit rates.