1. More ‘bad is good.’ In what’s becoming a normal turn-of-events in financial markets, disappointing data was printed and stocks rocketed higher on the ‘bad news is good’ theme. This is under the presumption that Central Banks will continue funding the stock-buying bonanza that’s enveloped financial markets over the past six years in the form of increased or additional QE allotments.

The most recent disappointing report was out of Japan, where trade data came in far below expectations. This is one of the most relevant data points for the Bank of Japan, and markets were looking for an ¥87 Billion surplus and we got a -¥114.5 Billion deficit. The big hit came from China – where Japan registered a -3.5% drop in exports. For an export-heavy economy like Japan, this is a terrible indicator that signals that more pain could be ahead, and with the next BOJ meeting looming a mere nine days away, expectations for increased stimulus are driving stock prices higher.

2. One market that did head lower last night was China: In yesterday’s piece, we discussed the momentous turn-around that’s been seen in small-cap Chinese companies, particularly small-cap technology stocks as the ChiNext Composite Index was up more than 34% since September 15th on increasingly heavy volume. Amazingly, this index had previously seen volumes fall off 99% when the major equity sell-off was taking place in June, July and August; and as global markets have caught their breath, volume has returned and prices have moved higher. Valuations are getting ‘stretched’ again as the ChiNext is now trading with at 71x earnings. The S&P traditionally trades at around 15x earnings, and right now we’re at 21.4. A multiple of 71 is higher than the S&P before the tech bust and the financial collapse; so this valuation is beginning to make some investors nervous.

But last night Chinese stocks were down heavily: The Shanghai Composite (shcomp) lost -3.06% while Shenzhen (szcomp) was down by -5.94%. The ChiNext index was down by -6.6%; and this contrasted with the rest of Asia, where most equity bourses traded higher on the day.

The expectation is that we’re going to see more easing out of Beijing; and as we discussed yesterday, the fact that smaller and more volatile companies are seeing stronger pops would indicate that this is a retail-driven bet on additional easing and government stimulus. But this isn’t a panacea, as we had quite a bit of regulator action in August that was unable to arrest the declines; and as a matter-of-fact, may have made the situation worse as markets lost confidence that regulators were going to be able to stabilize markets and stem the broader slow-down that was being seen throughout Asia.

This points directly back at the Federal Reserve, as their continued insistence towards a 2015 rate hike was the looming factor that served as a threat to markets, and even served as a capitulation point in early and mid-September as risk assets around-the-world hastened their sell-off on the heels of the Fed’s ‘hawkish-hold.’

For now, we’re seeing many risk assets trade in-line with each other, including American and Chinese stocks as we’re essentially seeing mirror-image themes across the Pacific. 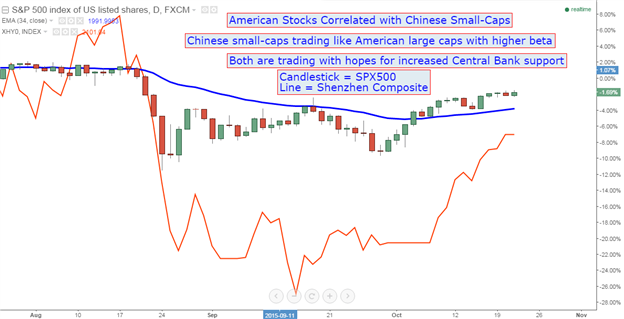