The Bank of Canada released its quarterly Monetary Policy Report alongside its monthly rate decision today, and the Canadian Dollar is trading slightly lower in their collective wake. While the BoC kept rates on hold at 0.50% - as expected per a Bloomberg News survey – the catalyst for the moves in USDCAD and other CAD-crosses came from the contents of the MPR. Given the sustained drop in energy prices, the BoC sees energy investment continuing to fall through next year and as a result, growth levels softening through mid-2017.

See the DailyFX economic calendar for the week of October 18, 2015 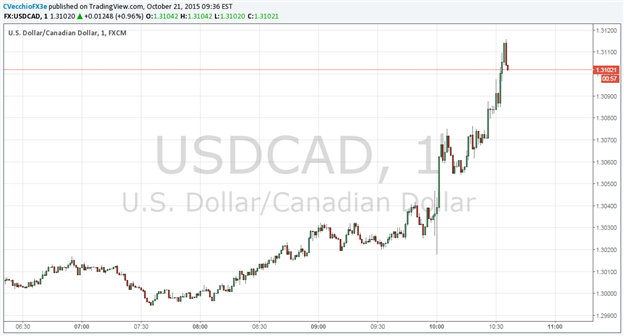 Following the data, reflecting the market’s collective surprise at the downgrades to the Q4’15 to Q2’17 GDP figures, immediately priced in a weaker Canadian Dollar. USDCAD initially traded lower from C$1.3036 to as low as C$1.3018, but quickly rebounded once the 2015 to 2017 GDP forecasts were revealed. At the time this report was written, USDCAD had rallied approximately +0.75% from its lows, and was trading at C$1.3102 after peaking at C$1.3116.

If there is hope for the Canadian Dollar to recover, the foundation has already been laid this week. The election of Justin Trudeau as Canadian prime minister could usher in new government spending policies (Mr. Trudeau platformed on running a budget deficit to fund infrastructure investments). Exchange rate theory suggests (under the Mundell-Fleming or IS-LM-BoP model) that expansive fiscal policy should boost a currency’s value; if the Canadian government is about to unveil stimulus measures, the Canadian Dollar could be in line for a longer-term benefit as the economy outperforms the BoC’s now more pessimistic forecasts.