Asian shares and the Australian Dollar rose Monday morning after third quarter GDP data from China printed better than the markets’ expectation. The headline figure showed a reading of 6.9 percent year-over-year as opposed to the 6.8 percent consensus forecast. This print is the lowest reading since June of 2009. China’s GDP from the second quarter was 7.0 percent. Amongst other data releases, retail sales beat forecasts at 10.9 percent annual growth through September versus 10.8 percent forecast. Industrial production meanwhile missed significantly at 5.7 percent versus 6.0 percent projected, while fixed assets grew only 10.3 percent against the 10.8 percent expected. The reading for fixed assets reached its lowest print since February of 2001.

In terms of the global economy, this print may provide some comfort to investors concerned over a hard landing amid the government’s effort to cool overheated engines on lending, real estate and manufacturing. The slowdown in China was a noted concern in the IMF’s recent financial stability report and a major contributor to downtick in global growth forecasts through 2015. This may weigh into another group’s evaluations of the future: the Federal Reserve. The world’s largest central bank admitted the health of the world’s second largest economy in its September monetary policy report. Traders will continue to pay close attention to Chinese data given the importance attributed to the once-dominant emerging market.

From the other side of the coin, the beat in the headline GDP offers a brief respite from building headwinds to trade partners and perhaps lowers the need for an imminent rate cut. That said, the extended slowdown in China may still mobilize other policy authorities to compensate for the important source of growth. From Australia’s point of view, this data may solidify the need for further rate cuts before year’s end. China is Australia’s largest trading partner, which may require further intervention to offset the diminished foreign support. The yield on the Australian two-year government bond rallied when the data was released. 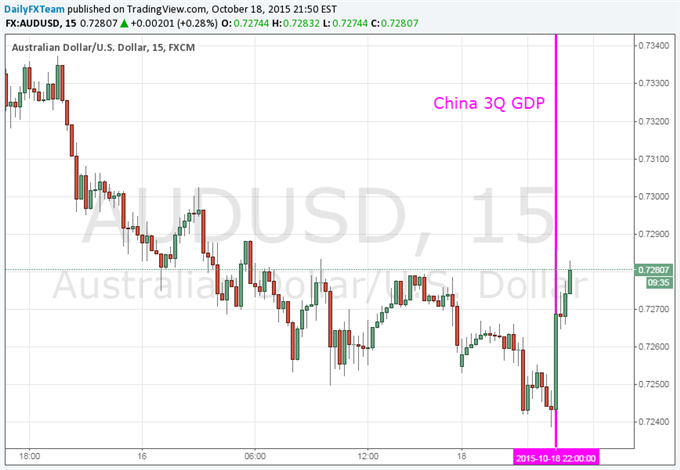