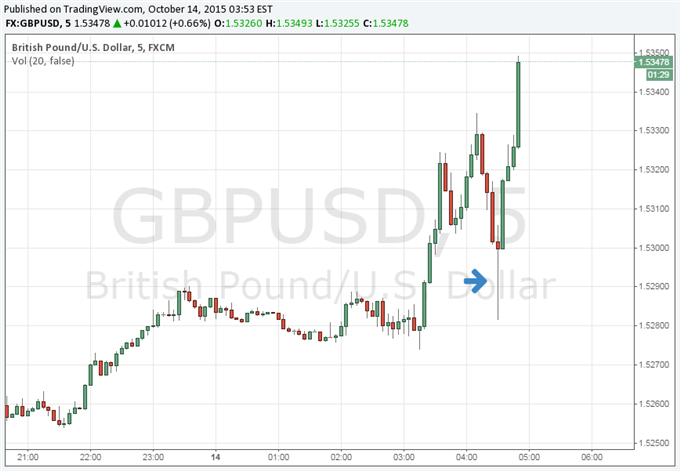 The British Pound gained more than 0.4 percent versus the US Dollar after today's UK employment data, which signaled that the British labor market is in good shape. The unemployment rate unexpectedly fell to 5.4 percent from June to August, below the 5.5 percent expected by economists, and below the 5.5 percent from prior three months. The country added 140K jobs, as expected, raising the number of people employed to 31.1 million. Economists were expecting the Jobless Claims, which is the number of people who claim unemployment benefits, to drop by -2.2K in September, yet the actual figure came in below the forecast with a rise of +4.6K. Core average weekly earnings slowed to 2.8 percent in the last three months, below the expected 3.0 percent, and below the prior 2.9 percent. Pay growth including bonuses rose to 3.0 percent from the prior 2.9 percent.

While there were some misses in the report, namely jobless benefit claims and core wages, the market seemed to have interpreted that overall wages are still healthy and that the data paints a positive picture for the UK’s labor market. Yesterday, the British pound dropped after inflation unexpectedly turned negative for only the second time in 55 years. While headline inflation remains well below the BoE’s 2 percent target, today’s jobs data is signaling strength in the UK’s labor market.

Currency Strategist James Stanley identified Near-term GBP/USD support at 1.5184, which could offer a long-side range play in the coming days