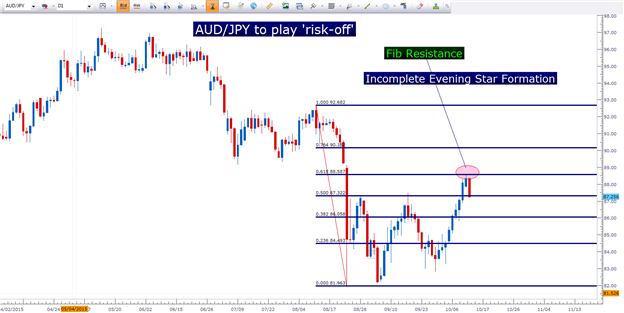 1. Chinese trade data was released last night, and it wasn’t pretty: Imports sank by -20.4% year-over-year, far below the expectation for a -15% contraction in imports. Exports fell by -3.7%, far below the 6.3% gain that was expected. This amounts to a record trade surplus for China in Yuan terms (and nearly a record in USD terms) with a $60.34 billion trade surplus.

This massive miss in imports highlights the deepening of the slowdown in China. Domestic activity remains subdued as the slowdown continues to engulf the Chinese economy. Recently rolled out measures that we mentioned yesterday could provide some help down-the-road, but Beijing will likely need to do more in the coming months to fully arrest these recessionary forces.

This negative print seemed to create more concern with China’s trading partners than China-itself. Chinese stocks held on to small gains to close the session with the Shanghai Composite up by .17% and the Shenzhen Composite up by 1.05%. But elsewhere in Asia, price action was more aggressive: The Nikkei went down by -1.11%, the ASX out of Australia moved lower by -.57% and the Hang Seng out of Hong Kong was down by a similar -.57%.

Perhaps more attractive are moves seen in the currency market, as the down-trends in many commodity currencies may be on their way back. AUD/USD and NZD/USD both moved lower on the data, and USD/CAD has put in a handsome two-day rally to pop back above the vaulted 1.3000 level on the pair. As we had discussed previously, the Japanese Yen could be a favored safe-haven vehicle of choice in ‘risk-off’ types of markets; and traders can look to buy the Yen against the Australian Dollar to make more of a concentrated play on an Asian-slowdown. The chart below highlights the current setup in AUD/JPY.

Chinese inflation data comes out tonight, and this could be pivotal as it speaks a little more closely to the growth number that’s being watched so closely out of China. China has been persistent about the 7% growth target despite the flurry of recessionary forces being seen in the country, and should inflation print at a disappointing number, this could be a direct forecast of weaker growth within the Chinese economy.

2. British Deflation: In another surprise print thus far on the early week, British Inflation printed negatively as CPI fell to -.1% in September. This was driven by lackluster gains in clothing prices, fuel and the price of household gas. This was the first negative inflation print that we’ve seen for the UK since April, and this diminishes hopes for that rate hike in early 2016 that markets have begun to look for out of the British economy.

In the most recent Bank of England meeting, Governor Mark Carney struck a cautious tone around global growth concerns, but continued to say that the view on higher rates should ‘come into sharper focus around the end of the year.’ This continuation of lackluster growth in the British and American economies, once the ‘high-flying’ economies that seemed certain to raise rates before the rest of the world, goes to show how the global growth slowdown has permeated throughout the rest-of-the-world. No economy is immune any longer.

The British Pound took a near-immediate drubbing on the news, as we’re seeing GBP/USD down ~150 pips on the day, with GBP/JPY down nearly ~200. 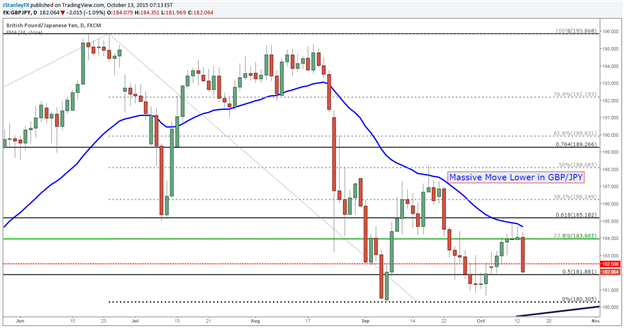 3. There’s a lot of news left for the remainder of the week: With these two pieces of bad data, markets can be thought of as taking another step closer to the ledge. Since we’ve seen stock markets come back over the past two weeks and as we’ve seen risk-assets take a step back from the ledge, we’ve also seen the Fed get more aggressive towards that 2015 rate-hike talk. This was the catalyst that seemed to throw matters in disarray over the past couple of months, and this could certainly provide more ammunition right now.

Should data continue to paint a negative picture, we can easily see those massive ‘risk-off’ trends of a couple of weeks ago come back into markets. This would equate to themes such as weakness in Stocks, particularly in Germany and the United States, weakness in USD/JPY and strength in EUR/USD as carry trades unwind further in a ‘risk-off’ campaign.

Of particular importance on the data front will be Chinese CPI, released tonight at 9:30 PM EDT, just as Chinese equity markets open for the day. Tomorrow morning, we get US Advance Retail Sales, followed by the Fed beige book at 2:00 PM EDT. Tomorrow night brings Australian employment numbers, and Thursday morning brings us inflation out of the United States followed by New Zealand CPI. We close the week with U of Michigan Consumer Confidence on Friday morning at 10:00 AM EDT.

The environment is ripe for volatility. As always, trade carefully: any position taken on is but one of a thousand insignificant little trades that a trader will take on in their career.

High-Importance Announcements on the Economic Docket for the week of October 12, 2015 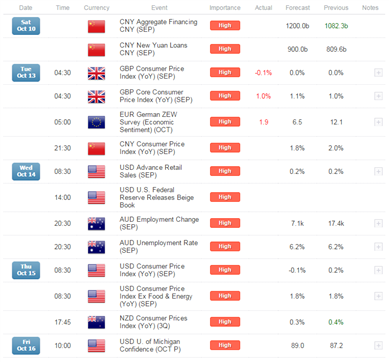