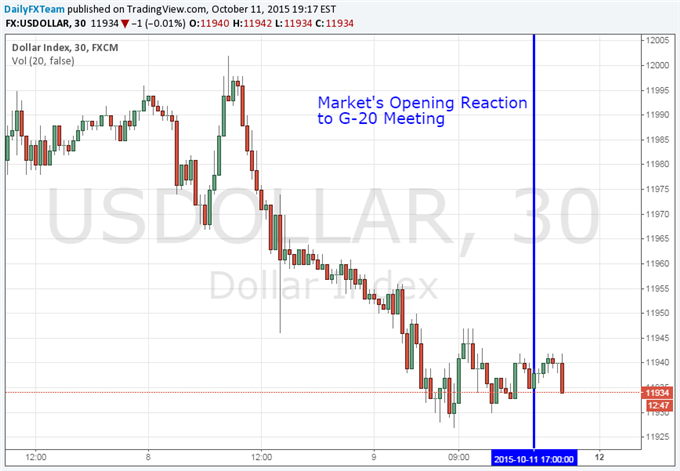 The US Dollar showed a tepid reaction at the weekly trading open as a possible interest rate hike this year by the FOMC was left uncertain after the G-20 meeting. Vice Chairman of the Federal Reserve Stanley Fischer stated that the lift-off for the base lending rate depends on the domestic economy’s progress. The central bank official said that consumer spending has increased “solidly of late” and prospects for further improvement in the labor market look good.

Proponents against an increase in the Federal Funds Rate are concerned about the possible spillover affects it may have in the global economy. Managing Director of the IMF Christine Lagarde is one of the advocates for a further delay by the US central bank. She believes the world economy is too weak to withstand a rate increase this year. Lagarde fears tightening by the Fed may adversely affect emerging markets due to her opinion that these economies have accumulated too much debt. The Fed’s public statement is that they do not expect developments in the international economy to affect policy decisions.

Whether the Federal Reserve decides to increase interest rates this year or keep them constant, traders should expect volatility to seize the markets. The central bank’s decision will be one of the key drivers for risk-on or risk-off sentiment in the near term. The current probability for the FOMC to tighten monetary policy at its next meeting on October 28 is 0.1 percent.