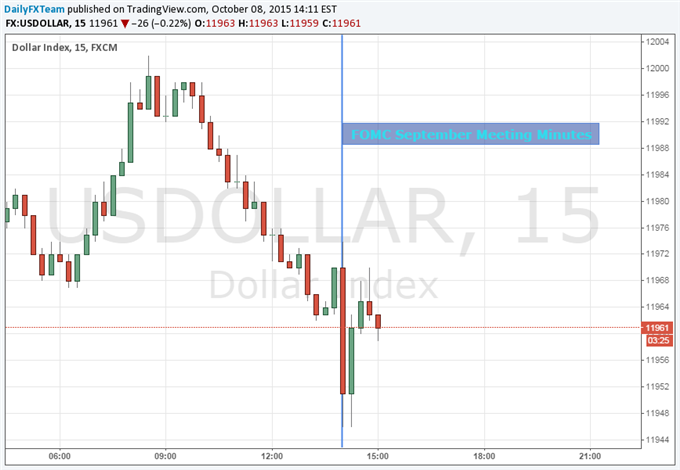 The US dollar moved lower after the Federal Reserve released the minutes from the FOMC’s September policy meeting. Adding to the confusion and doubt with the recent data indicating a slowdown in global growth, the transcript reiterated the belief of the majority that a hike is still on the agenda for the near future. According to the report, ‘many’ of the FOMC officials expected the liftoff later this year. According to Fed Fund futures, the market is still reticent to believe the assessment with the probability of a hike in October at 8.0 percent while a December move is considered a 39.3 percent probability.

Leaving the door open to the future – perhaps breeding confusion and doubt – the minutes also indicated that Fed officials said it was ‘prudent’ to wait for clarity on the outlook before liftoff as some participants said downside risks had increased. Among the concerns mentioned, China and Emerging Markets made a prominent showing. As for the recent market tumult, ‘many’ Fed members said they expect a small or transitory effect from the recent market decline. ‘Some’ went as far as to suggest the drop reflected an adjustment to high valuations.

Though more traditional outlets, a larger number of participants saw risks of inflation ‘tilted to the downside’ with several believing this risk will come from the US Dollar and oil. Almost all members expect inflation below 2 percent in the near term. Noting the dissention, one member did call for a rate hike as the zero rate policy was no longer appropriate – contradicting the balance that said economy conditions didn’t warrant a rate hike. On the opposite extreme, one member did call for greater accommodation in the form of negative rates. Minneapolis Fed President Kocherlakota revealed that he was the one to make the dovish call in a separate speech.