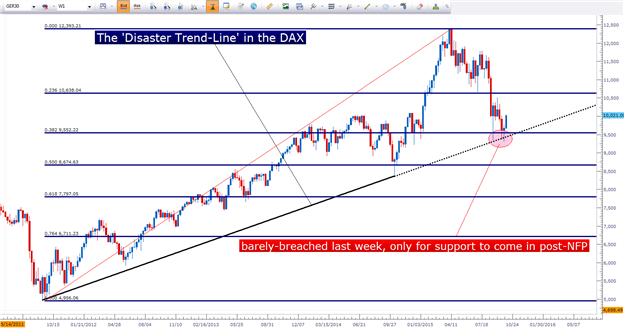 A Detour on the Race to the Bottom

1. More weakness for Germany: One of the factors that kept the Euro-zone from descending into full-on chaos during the European Financial Crisis was the continued strength of German production. With a weak Euro due in part to European-QE and continued economic hardship in Southern Europe, specifically Greece, Germany was able to capitalize with a robust increase in trade. This weak Euro made German exports cheaper around-the-world, and this massively helped companies like Volkswagen and BMW, as these premium products became significantly less-expensive in key markets like the United States and Asia.

This is what led to the bifurcation in the European economy; where states in Northern Europe were largely shining while states in Southern Europe were facing pain, hardship and lower credit ratings. This is also one of the reasons that, long-term, the Euro will likely not ‘work’ unless some type of banking union is formed to consolidate European interests. Until then, it’s cooperative competition and each of these economies has lost the ability to control their currency. But that’s a matter for another day, as Greece got the extension they needed and Portugal, Italy and Spain appear to have taken a step back from the ledge of economic catastrophe.

But what is troubling is the fact that the engine of German industry is beginning to show signs of weakness: Just yesterday we saw an unexpectedly negative print for German factory orders, putting in a -1.8% contraction versus an expectation for a .5% gain. This slowdown was largely attributed to the larger-slowdown in Asia, and as this is traditionally a volatile print there weren’t really many reasons to be sounding the alarm bells of panic as it may have been a one-off. But this morning, we saw further confirmation of a German industrial slowdown as German Industrial Production showed a plunge-like print of a -1.2% contraction versus an expectation of .2% gain.

This is a further sign that what’s being seen in the global economy right now is not relegated solely to Asia. The slowdown has damped growth in Europe despite the fact that the European Central Bank is in the midst of a full-fledged QE program. Right now, the DAX is teetering on a long-running trend-line that’s held price action for over four years. The past two weeks have seen multiple inflections off of this trend-line, and the huge risk reversal that we saw post-NFP is what helped to contribute to the upward price action after the quick breach on Friday morning.

And much of this newly-found exuberance since last Friday appears to be on the back of hopes for the Fed to kick rate hikes down the road even further to provide for a more accommodating environment in the world’s largest economy (and a key exporter for Germany).

2. The Fed isn’t showing many signs of backing down yet: The big point-of-consternation right now isn’t just a 25-basis point hike. This is about the Fed’s stance moving forward and the inevitable pullback off of ‘emergency-like,’ or ‘especially accommodative’ monetary policy. QE1 was triggered in 2008 to stem the bleeding of the Financial Crisis; but as we came off of QE1 and as markets were still showing signs of vulnerability, it became clear that a second round of easing would be necessary, and in November of 2010 that’s what we got. But even before QE2 had ended markets were already moving lower on the expected end of QE, and that led into QE3 in September of 2012.

Last October is when we had the capitulation of the ‘Taper Tantrum.’ This was when the Federal Reserve was winding down the final portion of QE3, and many investors were looking at the reality of a higher-rate environment over the next 10-20 years. This create considerable weakness for stocks from mid-September to mid-October of last year. The saving grace was Fed commentary alluding to the fact that the end of QE did not necessarily mean a direct increase in rates; as the general train-of-thought was that ‘less loose policy’ would eventually spell ‘tighter policy.’ A year later, and here we are.

The reaction that we’ve seen since Friday is exactly the type of ‘excessive risk taking’ that the Fed is looking to offset. Bad news is good again, and markets are rallying on the simple hope of additional stimulus. This increases systemic risks across the financial system and creates a dizzying environment for a private investor.

Imagine being three-to-five years from retirement: You know that you’ll need that retirement nest egg to last, so would you really want to buy a long-term bond right now? Bond prices and rates move inversely, so as rates move up – you’ll essentially be locking in a loss on the principal portion of that bond. Not only that, by investing now you’ll be getting sub-standard rates, as we’re still swirling in a ZIRP-y like fixed income environment. So buying stocks becomes the rational alternative, and again, the prospect of tighter monetary policy over the next 10-15 years doesn’t make that look like a great investment either. This is the consequences of ZIRP. We don’t really know how it will play out because the world has never been here before. But what we do know for a fact – the Fed wants to avoid risk, if at all possible, of creating another 2008-like bubble by keeping policy ‘too loose for too long.’ After all, keeping rates too low for too long is what started this whole mess in the first place with the Financial Collapse of 2008.

So look for Fed commentary to continue to be the primary driver across markets. A lot of bad stuff has happened over the last six years, and markets have largely shrugged most of that off; for the sole reason that Central Banks were fully supporting the investment environment with ‘emergency-like’ policy. But that may not be the case for too much longer; and each of these pieces of Fed commentary help to pain the picture of what may happen over the next few months.

The chart below looks at the impact of Stimulus on US Stocks. Notice how stimulus has essentially been the primary driver here for the past six years as the S&P throttled to new all-time highs. This highlights how extraordinary the past six years have been relative to the lifespan of the S&P. 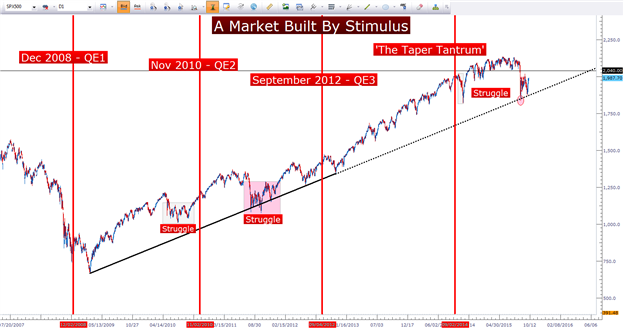 3. Tomorrow is a big day: Thursday October the 8th is a big day across financial markets. China re-opens from their Golden Week holiday, Alcoa reports earnings after the closing bell tomorrow and the Bank of England hosts a rate decision in the morning. Each of these events could highlight that premise of contagion, as each of these factors have larger overall Macro-economic implications. But also keep in mind the Fed commentary on the docket, as this could be even more market-moving than any of those other things: If we get Fed members speaking up 2015 rate hikes, we could easily see the rally of the past 5 trading days reverse with aggression.

Later today, Mr. John Williams of the San Francisco Fed speaks, and tomorrow we get three different Fed members offering commentary followed by 2 more on Friday. Tomorrow, Mr. James Bullard (considered a ‘perma-hawk’ for his consistent vote for higher rates), followed by Kocherlakota (considered a ‘perma-dove’ for his consistent pleas for looser policy, and thought to be the member that voted for negative rates at the last meeting), and then Mr. John Williams (considered to be more of a centrist) offer commentary to markets. Lockhart and Evans speak on Friday to close out the week of Fed-speak.

As always – go into this expected volatility with a plan. And if you don’t have a plan, you probably need one and the 360° program can be a great way to get started on a risk-focused trading plan and approach: The DailyFX 360° Program.