Stocks Sink on Fears of a Commodity Collapse

The source of current panic appears to be the surprise miss for Chinese Industrial Profits on Monday morning. This number printed at an -8.8% decline, and re-kindled fears that a Chinese slowdown would become contagious and drag down an already weak US and British recovery while Europe battles with their own economic ills. The most vulnerable area of markets has been commodities; with commodity stocks and commodity currencies facing extra pressure.

The Glencore saga taking place right now is somewhat indicative of how a Chinese slowdown could impact foreign economies. With slower demand for raw materials and commodities out of China, prices have dropped dramatically. As these prices have dropped, margins for commodity-producers have been squeezed – making it difficult, if not impossible to meet debt service levels. And as these commodity producers face additional hardships in paying their loans, the banks holding that debt become more risk-averse with other investments in the portfolio, which can lead to a credit squeeze. This is an overly-simplified example, but you get the gist of how a slowdown in commodity prices will likely spell additional pain throughout markets.

This is concerning, and as our own Ilya Spivak points out, The Glencore Stock Drop Conjures Up Images of the Lehman Brothers Collapse.

This is likely just the beginning, as there is no end in sight to the run that we’re seeing in commodities. And while this may appear bad, an already-sensitive US economy that’s recently enjoyed the benefits of shale extraction and fracking will likely face increased turbulence as these companies report quarterly earnings and continue to operate in a ‘below-break-even’ environment.

The next big piece of Chinese data can be telling, as Chinese Manufacturing PMI released on Wednesday night/Thursday morning (Wednesday night, 9PM EDT) will give us additional hints as to how aggressively that slowdown is taking place in China. The expectation is for a print of 49.7, with values below 50 indicating contraction. The larger the miss/beat of this print, the more volatility towards ‘risk-on’ and ‘risk-off’ themes one should expect. 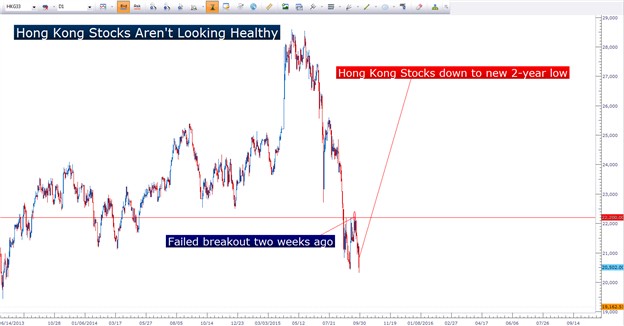 2. A Heavy Week of Data Could Define Price Action: While this may sound like an overly-obvious statement, hear me out on this: While data is always important to price action, when markets are on edge and potentially ready to blow-up, the data prints become even more important because it can be the differentiator between ‘panic mode’ and ‘relief rally.’ This is where we’re at now after the Fed’s ‘hawkish-hold’ of September 17th. With the Fed no longer supporting the market with loose monetary policy, there are fewer and fewer reasons for investors to ‘buy the dip.’ This has led to meager bounces off of support, and precipitous selling that hasn’t been offset by the usual demand for stocks that the world has become accustomed to over the past six years of ZIRP. And these relationships cycle through many financial markets with the premise of causation rather than correlation. As weakness has continued to permeate the global economy, vulnerable areas of the market like high-yield bonds (such as the type that financed commodity-extraction processes), real estate (many markets which are above 2007 highs) and biotech can get hit especially hard.

Of specific importance: We get European CPI numbers on Tuesday and Wednesday morning. On Tuesday we get German data and on Wednesday we get CPI for the Euro-zone as a whole along with German Unemployment numbers. In Europe, bad is good right now… as bad data will likely spell additional QE which can then be construed as positive for stocks. Good data, or beats of these prints, would likely spell the opposite impact, a lower probability of additional easing in the future, and could equate to weakness for European stocks (which can then be translated into weakness for US and Asian stocks), along with strength in the Euro as short EUR/USD carry trades continue to unwind with risk-aversion.

We get quite a bit of US data as well: Consumer Confidence on Tuesday morning, along with Manufacturing ISM on Thursday and NFP on Friday. Each of these could prove market-moving, and with the heavy focus on jobs and employment in the US, expect Non-Farm Payrolls to be even more important-than-normal.

The exception could be Chinese Manufacturing PMI, as this is released Wednesday night in the United States, and if we get a print significantly below the 49.7 expectation, we could see significant panic develop in a short-period of time, taking some of the wind out of the sails of this NFP Friday.

A loaded Economic Calendar for the remainder of the week: 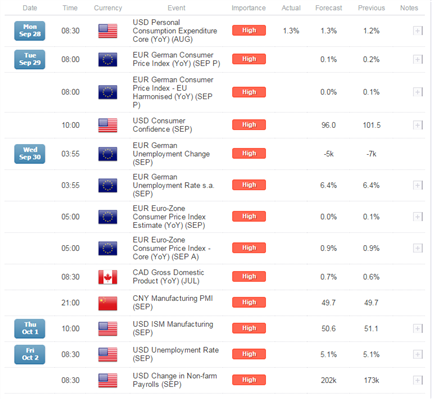