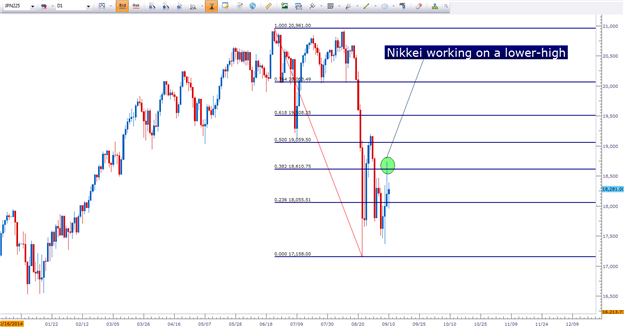 Chinese Inflation Beats, But Risk of Contagion Has Grown

1. Positive Chinese CPI brings on lower stock prices: It was another jagged night of price action in Chinese equities, but this time stocks finished lower for the day. The Shanghai Composite (SHCOMP) closed down by -1.39% while the Shenzhen Composite (SZCOMP) traded lower by -1.58%. This breaks the two-day winning streak that Chinese stocks had posted and noticeably missing last night was the ‘late session ramp’ that saw Chinese stock prices pop by greater than 2% in the closing hours of trade.

On a positive note, Chinese inflation came out above expectations last night – printing at 2% for August (year over year), beating the expectation of a 1.8% print. The primary source of this additional inflation has been attributed to the rise in food prices, as pork prices increased by 19.6% over the past twelve months –this is one of the few commodities pricing higher due to low supply, and it adds additional pressure on an already sensitive Chinese economy. This 2% CPI print means that inflation is now outpacing the one-year deposit rate in China, equating to a negative ‘real’ rate of return.

On the other hand, Chinese Producer prices (PPI) came in with a 5.9% contraction (deflation). This means that factory deflation can push up borrowing costs for the industrial sector (which is critical to the Chinese economy). This further erodes future profits because wages rise with CPI, and PPI deflation represents the prices of products. This squeezes margins for producers.

While many economies around-the-world are looking and hoping for any signs of inflation, the positive beat we just saw out of China may be the type of ‘positive data’ that you don’t want to see. This weakness in equities spilled over into Japan, which remains one of the more attractive ways to play the theme of a Chinese slowdown.

2. The Japanese Rollercoaster Continues: After yesterday’s +7.7% pop on the Nikkei, Japan put in another outsized move in the overnight session, this time moving lower by -2.5%.

This means that 10-day volatility levels are now greater on Japanese stocks than that of Chinese stocks. After reports on Tuesday that the CSI 300 Index and CSI 500 Index Futures have essentially died due by lower volumes driven by increased margin requirements, tightened position limits and pending police probes into the activity of malicious short sellers, this further highlights the prospect of looking to Japan to play the ‘risk off,’ or ‘panic’ theme should risks continue to rise as the Fed walks towards that first rate hike.

The primary point-of-contention for Japan is their ability to keep up with Chinese stimulus. Given the investment already made into the ‘Abe-Trade’ over the past three years, numerous questions persist as to the ability of Japan to embark on yet another round of QE: QE that has already put in a significant drive on prices in both the Nikkei and USDJPY. Now with the Bank of Japan essentially monetizing every bond that’s printed in the country, there aren’t many assets left to buy to embark on another round of QE. USDJPY is trading 50% higher than before Abe took office and installed his ‘three legs’ approach.

Yen strength or weakness has been driven largely by QE and expectations for more QE. This expectation for QE combined with low rates and low rate forecasts helps to drive carry trade flows with a low-yielding yen. But as pressure in the global economy builds, and as Japan becomes more exposed by not weakening their currency while China is – risks for the country’s economy continue to grow.

What could get the Yen back in a track of weakness would be commentary towards more QE down-the-road. As of yet, the Bank of Japan hasn’t given any indication that their considering this, but as pressure builds for the Japanese economy, expect that we’ll begin to hear this topic in the not-too-distant future.

Short USDJPY and short Japanese equities are two of the most attractive ways to play ‘panic’ in the current environment. 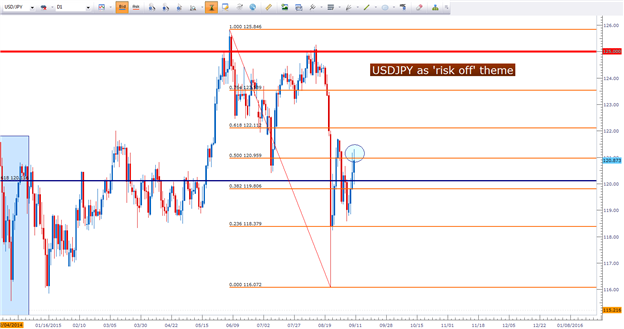 3. Citigroup sounding the alarm bells: After nearly three months of panic in Asian stocks that’s began to bleed into the rest of the world, investments banks are starting to get on the theme. Citigroup came out with a report yesterday that pegged a 55% chance of some form of a global recession in the next couple of years driven by a Chinese slowdown. They cited sliding demand from emerging markets (looking squarely at China) as a primary source-of-concern.

Later in the day, Brazilian debt got cut to junk status by Standard and Poors, sending yields shooting higher as investors sold out of these bond issues. This puts even more pressure on a Latin American economy that’s already been hit hard by the decline in Oil prices. There were numerous reasons cited for the down-grade: An embattled and controversial president is trying to manage above-line inflation with astronomical interest rates (highest rates since 06), while also trying to manage a corruption scandal at the state-run energy firm, Petrobas.

This is how contagion happens. It’s a domino effect where one bad event leads to another that eventually becomes a self-fulfilling prophecy. Next week, we’ll hear from the Fed as to whether the American economy is strong enough to hike rates; and meanwhile much of the rest of the world battles just to stay above water. 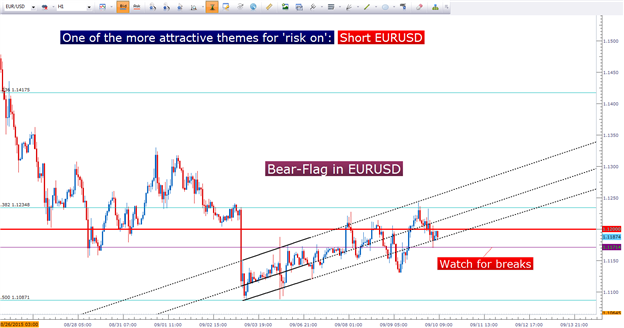