China Rips and Japan Dips While the World Awaits the Fed

1. Chinese stocks pop after posting declining export data. After spending most of the session underwater with prices lower by as much as -1.44% on the Shanghai Composite, a late-session rally brought equity prices back into positive territory, with a closing gain of +2.92%.

The late-session rallies are becoming more commonplace in Chinese stocks, and many analysts point to these price action rallies as being government-backed; Goldman Sachs came out with a report over the weekend that suggested that Chinese authorities have already spent $236 Billion propping up the equity market since the rout began.

This rally in Chinese stocks came on the same day that export data showed a -5.5% decline from a year earlier (in USD terms), further highlighting the growing weakness that’s been showing up in various areas of the Chinese economy. This was a better-than-expected print, as analysts were looking for a -6.6% drop in exports and this was narrower than the -8.3% drop in July. Imports, however, came in disappointing with a -13.8% drop from an -8.1% decline the month prior.

Stocks in Hong Kong jumped on this late session rally as well, with the Hang Seng moving higher by 850 points in the last 4 hours of trading, sending the index higher by +3.28% on the day. 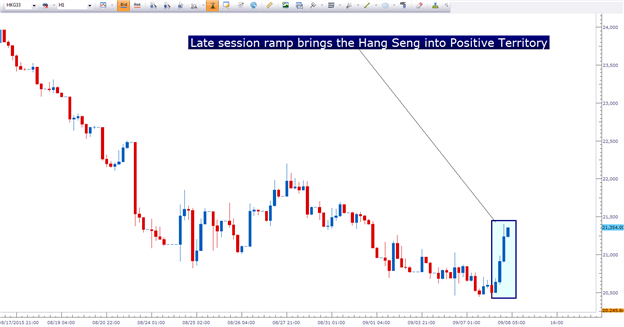 2. Japan drops, Nikkei now flat on the year: In a conflicting set of data points; China posted disappointing export data while Japanese GDP indicated that the slowdown in their economy was lighter than initially thought, which would usually be construed as a positive. Japan’s GDP contracted at -1.2% in the 2nd quarter of this year, less than the -1.6% clip reported last month and better than analyst expectations looking for a -1.8% contraction. This sent Japanese stocks lower by -2.43% to snuff out the remainder of their gain for calendar year 2015.

With the contradictory reaction in stock prices to each of these data prints out of China and Japan, this further highlights the potential for stimulus-hopes to be that next driver of equity prices. This better-than-expected GDP revision out of Japan shows that the Japanese economy is contracting less than originally thought, and this may be construed as removing pressure from the Bank of Japan for increasing future stimulus; while the disappointing export data out of China could make it more likely to see additional actions out of Chinese regulators.

On the chart below, we have USDJPY 4-hour candlesticks with the S&P 500 added in blue. Notice the strong degree of correlation, as weakness in stocks has been moving along with strength in the Yen. For those looking to play panic, short USDJPY could be a favored candidate. However, for those looking to sell the Yen, areas such as GBPJPY or AUDJPY may be more attractive. 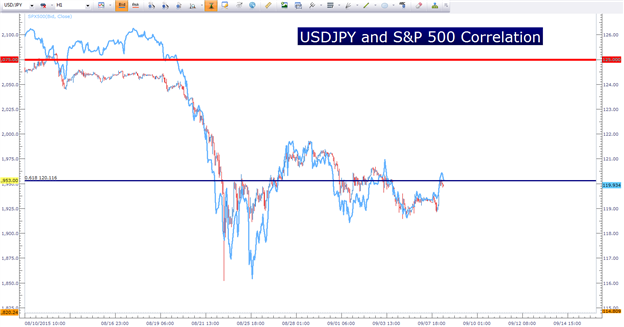 3. Central Banks on the Docket: This week brings three different major Central Bank Announcements, with Bank of Canada and RBNZ tomorrow and the Bank of England on Thursday. Of particular importance will be the commentary provided by each of these banks on the recent slowdown in China and the impact of falling oil prices. As heavy commodity exporters, both Canada and New Zealand will likely have something to say on the topic.

But China and the continuing discussion around the September Fed meeting will likely dominate the discussion around financial markets this week, as China was closed for Thursday and Friday and the United States opens after a three-day weekend.

For situations such as this, trading around the US Dollar could be a favored way to go into the week. We discuss such a strategy in the article, the US Dollar Hedge. Traders can look for setups in which USD-strength looks attractive, such as EURUSD. EURUSD is currently working on a bear flag formation (up-trending channel during a bigger-picture down-trend), and traders can look to get short on breaks of this rising trend-line. 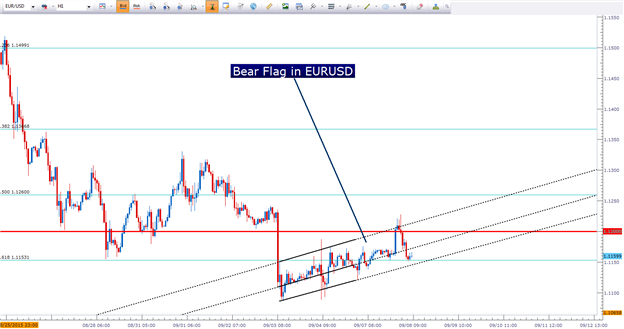