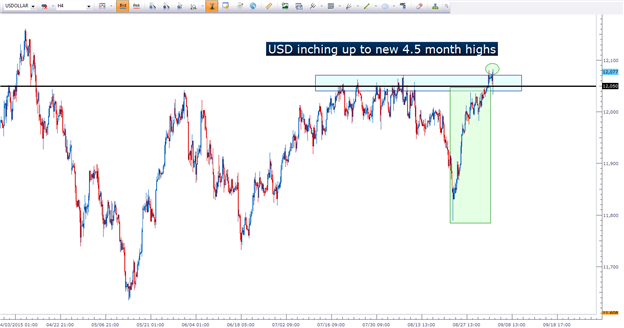 1. NFP disappoints with a print of 173K jobs added to American Non-Farm Payrolls: This was a rather outsized miss as the expectation was for 217k jobs to have been added. This brings on relevance in the fact that it’s the last NFP report before we get to the September 16-17 FOMC decision on rate hikes. Unemployment came in at 5.1%, which sounds good… but with Labor Force Participation at 62.6%, the lowest read since latter 1977. So this 5.1% unemployment rate isn’t nearly as attractive as it may first appear.

With strong employment being cited as a primary reason for the Fed looking to raise rates, this weak print may have just made that case ‘less strong.’

Although contrary to this, Fed member Jeffrey Lacker made a statement shortly before the NFP release that may have nullified this theory by stating that he didn’t think this report would have significant sway over the September decision, and he reiterated his thesis that he felt rates should be hiked to reflect strength in the ‘real economy.’

The immediate reaction to the print has been USD-strength, as we’ve seen the greenback pose a quick break above the resistance zone that we identified yesterday. But sellers have quickly come back in the fold as the dollar inches towards new 4.5 month highs. The net impact of this NFP report, all factors equal, should bring on USD weakness. But given the multiple pressure-points in the global economy right now, there are numerous factors that can change this trajectory.

2. The Yen as a Safe-Haven: An interesting by-product of the recent panic that’s seeped into markets has been the vulnerability of the Yen as a safe-haven currency in the inevitable flight-to-quality that accompanies such panic-prone environments. The fact that really exacerbated this theme was China’s devaluation of the Yuan, and the fact that the Chinese currency was no longer going to trade in-line with the Dollar. This exposes Japan – because as a key trade partner of China, this cheaper Yuan would mean that Japanese goods are more expensive in China, thereby hitting Japanese exports; and Chinese goods are even cheaper in Japan, further dampening domestic spending on products made in the country.

This is the ‘beggar thy neighbor’ strategy that’s somewhat of the ‘elephant in the room’ of the global economy right now. With few ways to stimulate economies, many central banks have moved to competitive devaluations through QE vehicles in an effort to feed liquidity into lending markets. And while QE may have helped the global economy avert a system-wide collapse in 2008, it’s done little to satisfy economists in terms of ‘real growth’ and the only real inflation that’s been seen has been in stock prices.

Earlier in the week, the G-20 put out a statement that they’ve agreed not to ensue with competitive devaluations with each other. But if given the option to let an economy melt-down or to put in another round of QE, most Central Bankers would likely elect the latter route.

What makes Japan interesting is that they might have a difficult time doing another round of QE. At this point, their QE efforts are essentially monetizing every bond that the country prints. So if QE is to happen, what assets would the Bank of Japan buy?

This is what helps to make the Yen a strong candidate as a safe-haven currency in the event of further panic. USDJPY has traded from ~80 to as high as 125.00 on the back of Japanese QE. And with the country facing continued difficulty on the inflation and growth front, it doesn’t look as though ‘Abe-nomics’ has ‘worked,’ at least not yet. The ‘three legs’ approach to reviving the Japanese economy now looks like one leg and two twigs.

The 120 level is the current area of interest on the Japanese Yen, and the pair trading below this price highlights fear in the environment. The ‘panic’ theme would likely entail lower probabilities of a rate hike in the US (USD weakness), combined with the expected further devaluation of Yuan which would likely bring additional strength to the Yen; and perhaps most importantly Japan would see safe-haven flows directly as investors eschewed return on capital for return of capital; and with Japan one of the few nations that would actually be able to pay off all of their debts in a liquidation-type of scenario, Japanese government bonds would likely become attractive again (which would mean more buying of the Yen and Yen-based investments). 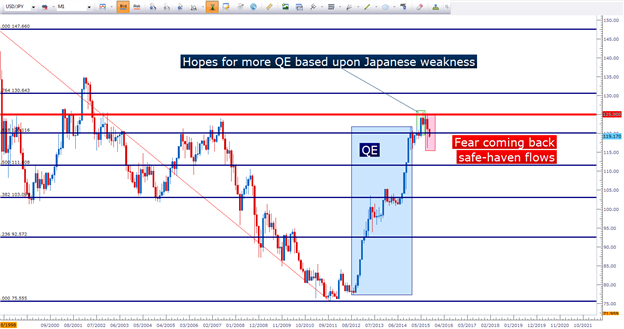 3. Monday could be VERY interesting – be extra careful with weekend risk: US markets are closed on Monday for Labor Day, and Chinese markets re-open after being closed for Thursday and Friday of this week in observance of a holiday and a military parade. Hong Kong opened back up for trading on Friday, and promptly traded down to a 2-year low on the Hang Seng Index (HKG33).

One of the most sensitive pressure points in markets right now is China, and the fear that a Chinese slowdown would bring the rest of the world into recession. Granted, the global economy looks as though it’s in a vulnerable space given the veracity of the equity sell-offs over the past couple of weeks, and what we’ve seen in the last 21 hours on the S&P hasn’t been constructive, as we’ve traded down by 50 handles since lunch-time yesterday in the US.

The crux of the matter is monetary policy: The world’s medicine has quickly become its detriment. Quantitative Easing was designed to prevent a credit lockup, to keep borrowing and lending flowing so that the world didn’t enter into a type of ‘global great recession.’ The United States embarked on three separate rounds of QE, as each time we came off of the medicine the economy became sick again. We finally ended QE last year, and since then the Fed has been talking about ‘normalizing policy’ to offset ‘excessive risk taking.’ Because one of the down-sides of ZIRP (zero interest rate policy) has been that investors had to search harder and harder for yields; building mini-bubbles in a lot of markets such as real estate (again), commodities (which seems to be busting already) and of course equity and debt markets. Making matters more difficult is that these ‘mini-bubbles’ are all over the world as opposed to just the United States.

So as the Fed began moving closer to ‘normalization,’ the world came to realize that the free ride on risk may be close to coming to an end. Even if we get one rate hike followed by a year of stability, this was a clear signal that the Fed was no longer supporting markets.

This is what’s exacerbated the Chinese concerns and the slowdown in Oil. The Fed is talking tough about raising rates and tightening policy while the rest of the world faces pressure. This has become so severe that one of the greatest market prognosticators of our time, Mr. Ray Dalio, has projected that we’d see another round of QE from the Fed before we get that first rate hike.

The early portion of next week could potentially see the ‘risk-off’ trade come back with gusto. In this case, look for weakness in stocks, strength in US, German and Japanese bonds combined with strength in Yen. The most attractive candidates for this theme are USDJPY, AUDJPY (given Australian exposure to China, GBPJPY and EURJPY. 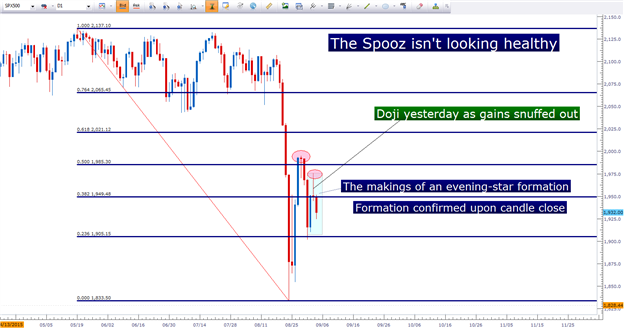