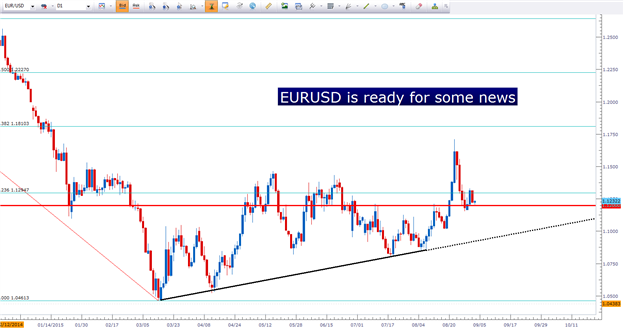 1. Will the ECB have more QE for the world? As much of the world hangs onto the prospect of economic stability by an extremely thin thread, Investors have begun looking to Europe for the additional stimulus to keep global markets afloat. After the Fed struck a hard line on the rate hike talk earlier in the year, investors began bracing for impact as it became clear that the Central Bank for the largest national economy was no longer looking to ‘support the market’ with bond purchases. When this expected tightening of policy ran into an extreme sell-off in commodities combined with an economic slowdown/market melt-down in China, this helped to create a rather brisk ‘fight-to-quality,’ that brought on fears of another Financial Collapse. But the world has caught its breath… and nothing has melted away, at least not as of yet.

So hope has turned to the European Union and the European Central Bank. The ECB has already left rates unchanged as expected, but the real matter of importance is the press conference that begins at 8:30 AM EDT. It’s largely expected that the ECB will lower their inflation forecasts, which could be a prelude to an increase in QE. While an expected announcement of QE is likely not in the cards today given that we’re likely just starting to see the impact of bond purchases on the European economy, Mario Draghi striking a dovish tone could set off a bout of risk-taking in markets similar to what we’ve become accustomed to over the past six years of debt-fueled asset price gains.

In many currency pairs, the Euro finds itself at support: EURUSD is supported off of the 1.1200 level, EURJPY at 135 and EURNZD at 1.7650. The risk-reward from a technical standpoint is more attractive to the long side of the Euro.

On EURUSD specifically, breaks of 1.1200 could be construed bearishly, and traders can wait for support to give way to signal the potential for further weakness, and after support is cleared they can begin looking for resistance in that old zone of support before initiating short positions. On the long side, Fibonacci resistance at 1.1295 could offer an initial profit target level, and with ~35-40 pips of risk that could offer a 1-to-1.5 risk-to-reward ratio.

2. Non-Farm Payrolls Due tomorrow at 8:30 AM EDT: The expectation is for a print of 217k jobs added to American Non-Farm payrolls and with the heavy dose of risk aversion sweeping the market – this may have a one-sided implication for US rate hike expectations.

A weak NFP print will likely further price out the odds of a September hike: While expectations have been decreasing mightily while the world braces for the impact of a hard China landing, September still isn’t completely off the table. A strong print, on the other hand, won’t likely budge those expectations for a September hike much higher. If we see a blowout number (like 300k+), we’re likely to get some element of confusion around markets, but the odds of a print this far out of expectations is very unlikely.

The last eight trading days have seen the US Dollar come screaming back to resistance, as investors loaded back into carry trades as it became apparent that a global market meltdown wasn’t imminent. NFP could give this the juice to finally break above 12,050; a level that we haven’t been at since April when the Fed began backing up those rate hike hopes. This is the period that many in the financial media are referring to as ‘The Fed’s best chance to normalize policy.’ With hindsight being 20/20, this may have been the case, as waiting for later in the year has merely exposed to the Fed to additional exogenous risks (like a Chinese slowdown).

Breaks over 12,050 are bullish, and one of the most ideal ways to play such a situation is to let the dollar break above resistance, and then wait for it to catch support in the same zone that had functioned as previous resistance. This may take a few days if we get a strong NFP number tomorrow. 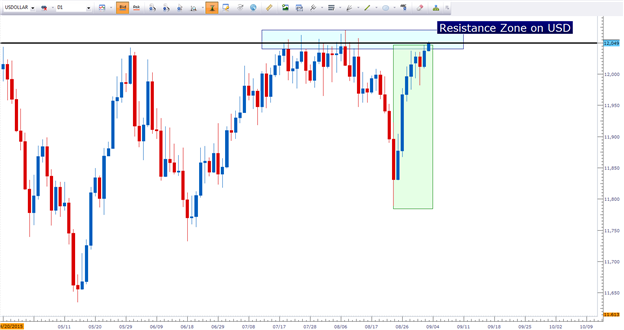 3. Cash is a position too: With the potential for significant volatility in the cards over the next three-to-four trading days, it’s important to keep the big picture in mind: The trader’s job is to make money by forecasting future price movements. As anyone that’s ever traded out of more than a few positions knows, this can be difficult. Forecasting future price movements is less about prediction, and more about probabilities; and risk and reward always go hand-in-hand. When we enter a period such as we’re in, the probabilities of a strategy or any specific trade working out decreases because there is more uncertainty in the environment, and price action becomes more chaotic.

So while there are numerous setups out there that look attractive that could certainly be aided by an influx of volatility, keep the big picture and long-term goals in mind. You have to be ready to take quick stops in a fast market, or else you run the risk of one ‘bad’ trade wiping out the gains of five, six, or even seven winners. This is The Number One Mistake that Forex Traders Make; and this is likely an issue that traders in other markets suffer from as well, but unfortunately that type of retail trader data isn’t available for other markets for us to analyze.

Opportunities are infinite… Capital is not. If you miss a trade setup today, there will be plenty more tomorrow. But if you lose capital today, well it’s not just going to grow back by itself. For most traders, it’s much more preferable to miss a setup than to lose capital. For anyone that would like to learn more on the topic, we discuss further in The ABC’s of Risk Management.