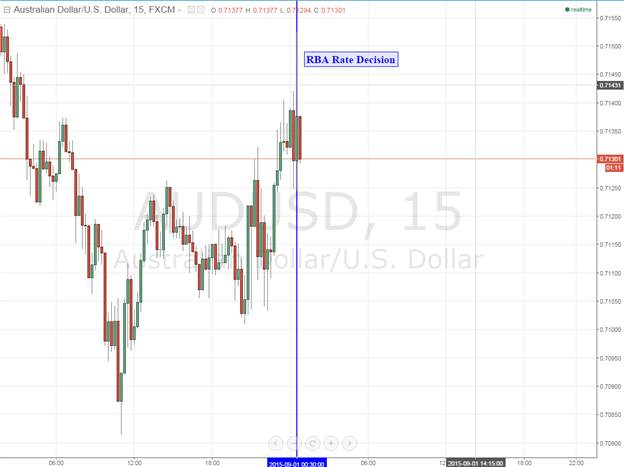 The Australian Dollar was left little-changed versus its US counterpart after the Reserve Bank of Australia left its benchmark lending rate at 2 percent. All 27 of economists surveyed by Bloomberg predicted that the central bank would not make an adjustment at its September meeting. The RBA has now left rates unchanged for four consecutive meetings.

Currency Strategist Ilya Spivak said that market sentiment over recent weeks has rekindled speculation that Governor Glenn Stevens will ease in the not too distant future. Priced-in RBA monetary policy expectations derived from overnight index swaps deteriorated as the S&P 500 declined for 6 consecutive days through mid-August. The metric now shows markets forecasting at least one rate cut over the next 12months.

Looking at the RBA’s monetary policy statement, the central bank judged that leaving the cash rate unchanged was appropriate at this meeting. Further information on economic and financial conditions will continue to adjust the committee’s outlook for effective policy. Most of what the bank said remained nearly identicalto the text released following Augusts’ meeting, with a brief acknowledgement of recent turmoil in China marking the only notable difference.

The lack of a clear-cut shift in rhetoric its likely to see investors’ focus shift to upcoming economic releases. In particular, on Wednesday Australia will release its Gross Domestic Product report for the second quarter of 2015. Expectations are for the country to grow 2.2 percent (YoY) versus 2.3 percent in the first quarter, marking the weakest performance since the final three months of 2013.