Stocks Surge Ahead of Jackson Hole

1. Risk was most definitely ‘on’ throughout most of the trading day yesterday. Led by gains in China, global equity markets popped higher with aggressive price action on the premise that the global economy isn’t melting down; at least not right now, anyways.

The Chinese trading session was quite similar to the day prior, in which stocks stayed within a relatively well-defined range for the early portion of the session, only to see a late-stage ramp ahead of the close. The Shanghai Composite (shcomp) closed higher by +4.82% and the Shenzhen Composite (szcomp) was up by +5.4%. This pop on the Shanghai Composite puts in the index back in positive territory year-to-date, showing a 1.38% return for 2015 (49.69% year-over-year).

Japan has also seen a nice ramp to go along with resurgence in Chinese and American markets, as the Nikkei crossed above the psychological 19,000 level, and is currently catching resistance on the under-side of a projected trend-line connecting the swing-lows since 3/31 of this year.

With the Chinese holiday on Thursday and Friday of next week, and Labor Day in the United States the following Monday – next week could be a rough time for short-position holders. The ramp in Chinese stock prices over the past two days speaks to the theory that the government may be supporting stock prices ahead of this national holiday. The following Monday could be extremely interesting in Asia given that the United States is on holiday.

Until then, look for breaks higher in the Nikkei or USDJPY to get long on these moves. 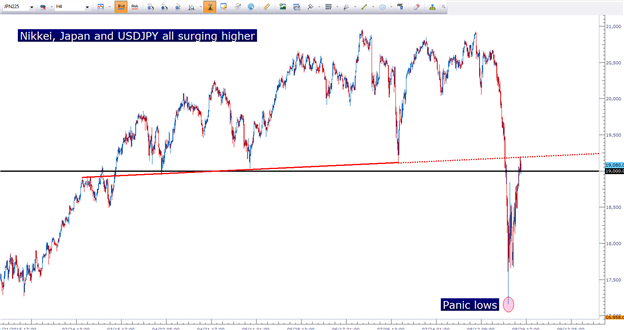 2. The Fed ‘has the market’s back’ ahead of Jackson Hole: The driving theme of the past two weeks has likely not been 100% China-related. Surely, a slowdown in the country could spell short-term weakness; but long-term there isn’t even really a question that China will be a bigger economy ten or twenty years down the road. The more likely driver here has been Fed policy, and more specifically Fed communication. Just two days ago, ahead of Mr. William Dudley’s comments that brought support into markets, I had written how what we’re seeing now is the ‘ugly under-belly of ZIRP’ as the Fed looks to normalize policy. The Fed has chosen to normalize policy by hiking interest rates, even though they’re sitting on a ballooned balance sheet from six years of QE. This despite the fact that headline inflation is running near-zero and unemployment numbers are presenting extremely low labor market participation. As in, while we may have seen some semblance of ‘recovery’ in the United States, the lack of inflation combined with low labor market participation and low wage growth has many thinking that this hasn’t really been a ‘great’ recovery yet, at least not one that warrants a rate hike just yet.

This most recent market tumble began with the release of Fed Minutes last Wednesday. These were the Minutes that were leaked a full 24 minutes ahead of the release and provided considerable confusion around whether the Fed was going to hike in September or not. This confusion, combined with weakness in Commodities and trouble in Chinese stocks provided enough of a catalyst for risk managers to eject from risky trades in a flight-to-quality. We saw many of these carries unwind, with EURUSD heading higher and USDJPY heading lower, as the world braced for impact.

But Mr. Dudley’s comments on Wednesday provided enough ammunition to bring in support. Mr. Dudley essentially said that the Fed ‘has our backs,’ by indicating that weakness in Oil and China makes a September hike look less likely. We’ve seen the S&P trade up by 120 handles since those comments, and the precipitous selling that marked trading early in the week hasn’t yet returned.

With the Jackson Hole Summit this weekend, expect to hear much more from the Fed. As for the S&P, there is a lot of room to run higher ahead of the national holiday in China and the litany of data for next week. 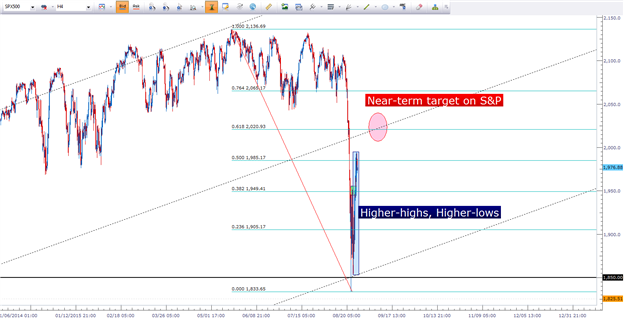 3. Brace yourself for next week: Next week brings on RBA (Reserve Bank of Australia), ECB (European Central Bank) and NFP (Non-Farm Payrolls) – all reports that could bring considerable volatility into markets. With the Chinese national holiday on Thursday and Friday and Labor Day the following Monday, it’s worth noting again that extreme volatility could present itself over the next couple of weeks.

What are clear are risk-trends: If the world isn’t melting down and if stocks are moving higher, long USDJPY and short EURUSD are attractive themes. If we do have panic setting into the environment, then long EURUSD and short USDJPY become attractive.

This can be a prime environment for employing shorter-term strategies that allow for tighter risk management. Look to the shorter-term charts to afford a cheaper or tighter stop, and try to focus on increasing your average reward per dollar/pound/euro of risk. My fingertrap strategy can be one way of doing it, and for anyone that’d like to learn more this article will walk you through the entire strategy. You have to keep in mind that in these types of volatile markets, the probability of a reversal or a fast move is considerably higher than normal. So the odds of you getting on the right side of an extended move are even-lower. As a trader, you have to find a way to offset this higher degree of variability, and looking for bigger rewards when you’re right and smaller losses when you’re wrong is the most accommodating manner of doing so.