1. It was yet another climactic night in China, but last night’s session ended on a considerably more positive tone than the gut-wrenching price action of the days prior.

In a report this morning, Bloomberg shares information from an anonymous source that claims that the late-day ramp was due to government buying ahead of a September 3rd holiday and parade to celebrate the 70th anniversary of victory over Japan in World War II. After rate cuts and cuts to reserve requirements failed to bring support into stocks, a market meltdown has created considerable negative sentiment in the country. The report claims that the intervention was implemented to counter this sentiment by bringing some semblance of stability to Chinese stock prices ahead of this parade.

China’s markets will be closed on September 3rd and 4th (next Thursday and Friday) in observance of this national holiday.

Stocks in Hong Kong enjoyed a considerable portion of this rally, as a higher-low has been established at the 21,000 psychological level and higher-highs coming off of the 22,000 level. 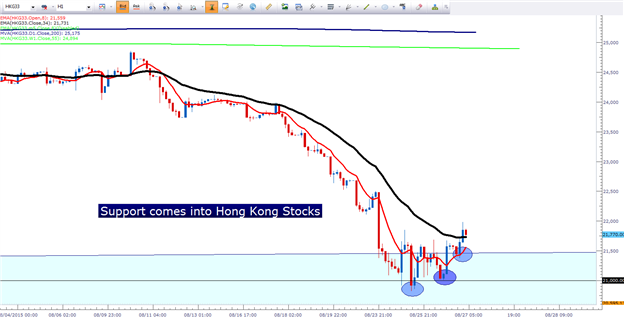 2. US Stocks go back into ‘Bull Mode’ after Dudley Comments: The early portion of US trade yesterday appeared as though ‘crash-like’ conditions may be coming back into the US stocks. But commentary from NY Fed President William Dudley, often considered one of the more dovish FOMC members helped to bring support into stocks.

The most recent rout in markets began with the release of Fed minutes last Wednesday. This is when US stocks started sliding, and finally broke below the 2,040 support level that had held the S&P 500 for six and a half months. As support levels started giving way, that’s when panic began to set in. With the sell-off in the early portion of US trade yesterday, it appeared as though Chinese stimulus was going to be fully priced-out of the market within a few days of being added in, but Bill Dudley stepped up to the plate and gave enough of a compelling case for buying stocks. Mr. Dudley said that a September hike was looking ‘extremely unlikely as a liftoff date.’ He also said that we were far away from QE4 discussions.

This helped to further evaporate expectations for that September hike, and opens the door for numerous discussions for creative implementation of monetary policy given the Jackson Hole meeting that begins today. 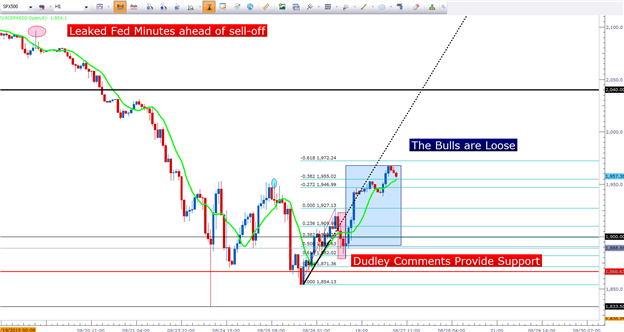 3. Euro down-trend back in order? One of the brightest aspects of ‘panic’ leaving the market could be the return of risk-trends in markets. As in, those carry trades that have been unwinding en masse may be free to float back in their rate-driven order. Of specific interest is the EURUSD, as we’ve been getting lower-lows and lower-highs on the hourly chart; and price has just sunk into a previously strong support/resistance zone in the 1.1300 neighborhood. We’ve also just crossed back below the 200-day moving average, and breaks below this level could open up bearish setups to go short in the pair.

An important point-of-emphasis, as this has been a popular topic of recent: The Euro is not a safe-haven currency. There were many accusations of such as EURUSD ripped higher while panic and volatility was increasing, but as David Rodriguez laid out yesterday, this was more likely unwind of a carry trade as the Euro has become a viable funding currency. With fear permeating the environment, traders were compelled to close out the short EURUSD position for fear of bigger problems. To close a short position, one must buy and that equates to strength. After the EURUSD shed over ~3500 pips in 9 months on the back of European QE and break-up concerns, much of the market was left net-short. To the point where most anyone that wanted to be short EURUSD was short EURUSD, and it takes sellers to move prices lower.

With a sense of semblance coming back into the global environment, and with China supporting prices going into this September 3rd holiday and while the Fed meets in Jackson Hole – risk trends could be let free to come back into markets. 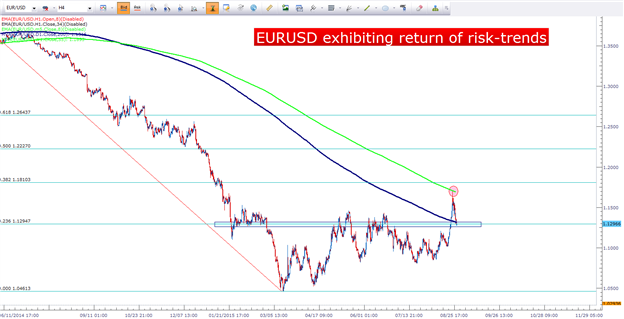