1. It was another rocky night of trade for Chinese stocks after regulators rolled out both an interest rate cut and a cut to bank reserve requirements. Global stocks popped yesterday after the Chinese close on the back of this stimulus announcement, but as we entered the US session, equity weakness persisted to the point of pulling US indexes into negative territory. What was being proclaimed by the media as ‘the biggest rally of 2015,’ quickly turned into ‘the biggest reversal of 2015.’

The Asian-session was somewhat climactic as Chinese stocks put in another night of heavy and volatile price action. The Shanghai Composite was up by as much as 4.3% on the back of stimulus hopes, and down as much as -3.9% on fears of stimulus ‘falling short.’ Stock prices struggled in early morning trade, only to get a strong pop over the 3,000 psychological support/resistance level after the mid-day break. But as the session wore on, stock prices put in a slow burn to close below 3,000 yet again. The Shanghai Composite (shcomp) closed down by -1.27% and the Shenzhen Composite (szcomp) finished the session lower by -3.05%.

Stocks in Hong Kong followed as the Hang Seng put in yet another bounce off of the 21,000 psychological level. This is a familiar level for the Hang Seng, as it was the same support level that came in during 2008 before the Financial Collapse really got start. In March of 2008, the Hang Seng found support in the 21,000 region to bounce back above 26,000. But the next six months (May to October of 2008), saw the Hang Seng drop 60%, below 11,000 before finding support on the back of global stimulus. 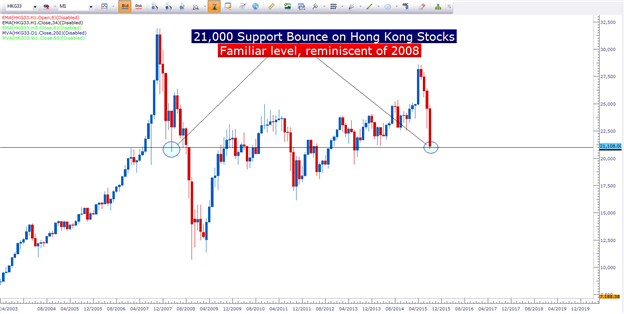 2. Late-day sell-off in the US highlights rising fear as the confluence of risk factors was enough to counter Chinese stimulus. Global stocks had largely cheered the announcement of more Chinese stimulus and US stocks opened higher by more than one percent across the three major indices (SPX500, NAS100, US30) and Europe closed with hearty gains. But as the US session wore on, more selling came into the fold to bring prices lower.

The announcement of Chinese stimulus and the accompanying pop in stock prices merely served to give sellers a better price to close out positions, at least on US stocks. 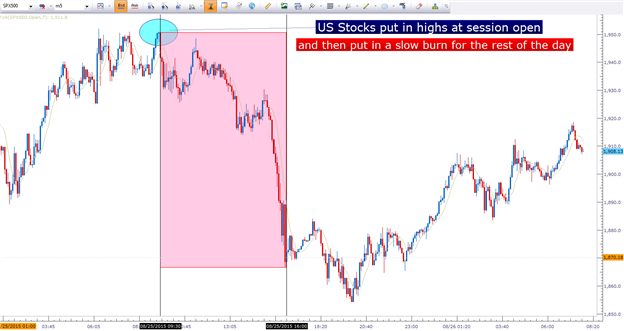 Notice that S&P 500 Futures have clawed back above the 1,900 psychological level ahead of the US open today. The next two days will be very important for US stocks, as we get Durable goods today and GDP out of the United States tomorrow.

3. Confusion is spreading as fast or faster than contagion: Confusion around the Fed rate hike, confusion over how much a China slow/melt-down might impact foreign economies and confusion over what lower commodity prices really mean to consumers and financial markets. And when you follow or read about this type of stuff every day, it can be difficult to keep matters in scope.

What we’re seeing now is the ugly under-belly of ZIRP (zero interest rate policy) and what the Fed had spoken of before on the topic of ‘excessive risk taking.’ This is why the Fed wants to hike rates in the first place when they probably don’t have a legitimate reason to as inflation has remained lackluster throughout the ‘recovery’ after the Financial Collapse. Quantitative Easing was never designed to be an economy builder. It was merely meant to help the economy from going into full on depression-like collapse mode. And it worked, at least so far; as the world staved off economic disaster and avoided a repeat of the Great Depression on a very global scale. But over six years of low rates, investors had to look harder and harder to find a return. And as stock prices continued to rise, confidence continued to grow that riskier and riskier investments could be taken on as global Central Banks ‘had the market’s back.’

Well, as the Fed looks at this first interest rate hike, whether it’s in September or December or 2016 or 2017 - the situation has become clear. The Fed no longer is supporting the market in the way that they have been over the past six years. They’re looking to ‘normalize’ policy. Those ‘excessive’ risks are coming home to roost, and investors that are still long of these asset classes are all shuffling to see who can get out of the door first. As the rush out of the door turns into more of a stampede, that’s when panic begins to set in.

Ray Dalio, who is probably one of the greatest traders of our lifetime, spoke on the matter yesterday, and he said that he thought the next action out of the Fed would be QE4 and not a rate hike. Dalio pontificated on the matter and explained his very sound logic for why he feels a rate hike isn’t coming anytime soon. This is the type of trader that you want to listen to when he speaks. He isn’t known for ‘talking his book,’ in the same way that most hedge fund managers are, and he’s extremely open with his strategies on not just markets but life. For anyone that would like to read more about a fascinating and insightful trader, Mr. Dalio has made his personal manifesto public, and you can read it from the link below: