The Chinese Yuan (CNY) has seen a series of daily declines resulting from actions by the People’s Bank of China this past week. This has in turn revived the debate of exchange rates providing unfair trade advantages. Yet, looking at the comparisons, the Yuan isn’t the only one. 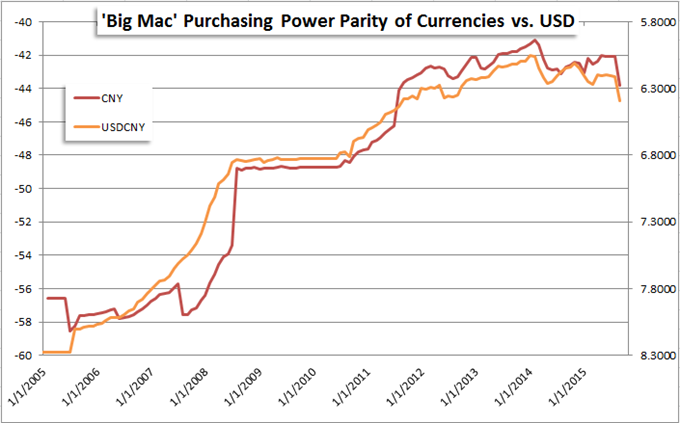 The Big Mac Purchasing Power Parity index is a useful benchmark for measuring the relative fair values of currencies. For the exchange of goods between two countries to have equivalent purchasing power there needs to be an adjustment to the exchange rate. These adjustments occur through market forces and can be explained through the theory of purchasing power parity. Although exchange rates adjust between currencies the purchasing power of one currency still be qualitative and perhaps even quantitatively over- or under-valued relative to another. In the chart below we see the value of the Yuan and major currencies compared to the USD according to the Big Mac PPP Index. 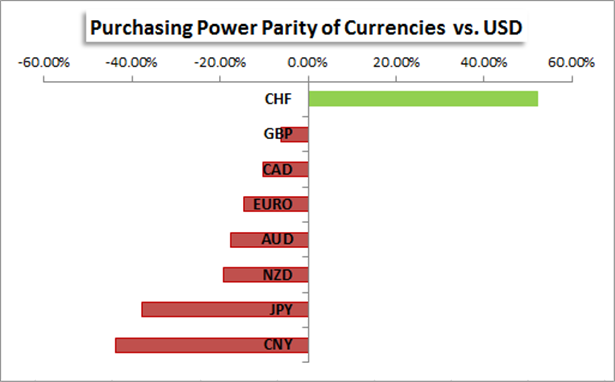 The undervalued level for most of these currencies compared to the USD can potentially be attributed to a number of factors. However, one stands out prominently: expansive monetary policies implemented by their central banks. The Bank of Japan, the People’s Bank of China, and the European Central Bank in particular moved from rate cuts to unorthodox stimulus programs to revive growth and inflation in their economies. While these central banks pursue easing policies, the Fed is inching closer to a possible rate hike; and the divergence this is developing can be seen through relative value.

In the chart below of historical data from the Big Mac index we can see the Euro and the Japanese Yen both pushed deeper into under-valued territory versus the US currency as their efforts pursuit of accommodative policy escalated. 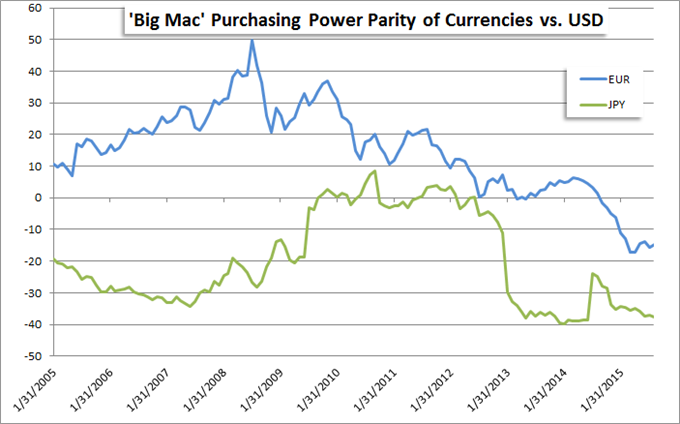 The monetary policies of these central banks and especially the multiple devaluations of the Yuan by the Peoples Bank of China have fueled an ongoing debate as to the motives behind their actions – perhaps implementing policy for FX impact explicitly and procuring an ‘unfair advantage’. The trade advantages of a devalued currency – especially against the USD which is the world’s largest consumer economy – can be economically stimulative for a country’s exports. Yet, intention is everything, and most say a competitive exchange rate is not their objective – including the PBoC.

While Purchasing Power Parity does not give a definitive assessment of a currency’s over- or under-valuation versus its counterparts and it certainly cannot prove intention; many will continue to use it as evidence of both.