1. China data disappoints and Chinese stocks move up almost 5%: Chinese exports put in a huge miss over the weekend, printing at an -8.1% contraction v/s an estimate for a 1.5% decline. Reasons cited for the outsized miss were lower demand out of Europe and a Stronger Yuan, which remains tied to the US Dollar in a relatively tight range, and will likely be so until the IMF moves closer to reviewing the currency for reserve status (expected September 2016).

For an export-based economy like China, these types of data misses can be troubling, and it points to the fact that exports may not be the same growth engine for the economy moving forward; and with a potential US rate hike later in the year (which would likely bring USD strength – which would then bring Yuan strength) this could only add more pressure on Chinese exports.

Chinese CPI came out over the weekend with a print of 1.6% v/s an expectation of 1.5%, and Chinese Producer Prices were issued showing their lowest level since 2009. The misses in PPI and Exports could spell additional stimulus from Beijing, as the Chinese government continues to attempt to stabilize what can best be described as a frenetic market.

Chinese stocks on the Shanghai Composite rallied 4.92% on hopes of additional stimulus (or state-sponsored buying), while Shenzhen was up 4.49%.

2. The Commodities Carnage Continues to snare victims: On Thursday night of last week, the Prime Minister of Canada, Stephen Harper, admitted during a televised debate that the Canadian economy was in a recession. The economic weakness in Canada isn’t news to anyone that’s been watching the USDCAD spot price (or Canadian exporters sending product to the United States), as we’re currently trading in 11-year low territory for the Canadian dollar (11-year high on USDCAD).

While we’re technically one month away from a ‘technical recession’ in Canada, Mr. Harper’s sentiment is fairly emblematic of many commodity-based economies right now. Economies in Australia, New Zealand, Canada, and throughout Africa have been hit especially hard, as falling commodity prices have squeezed margins of commodity producers, thereby bringing additional weakness throughout these economies.

Buying USD against currencies from these economies can remain as one of the more attractive themes out there, especially against Canada, Australia, New Zealand, South Africa, and Mexico. This week could provide a fantastic opportunity to get long USDCAD, USDZAR, USDMXN or short AUDUSD, and NZDUSD.

3. Relatively light data calendar this week: The early portion of the week starts out quietly as we get one high importance announcement tomorrow with the German Zew survey. After that – we have to wait until Thursday to get another high-impact announcement as we get US Advance Retail Sales, and this could inspire USD-volatility. 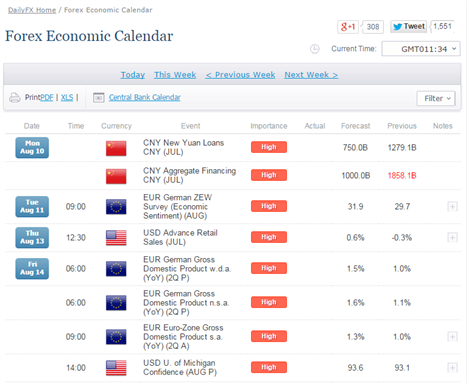