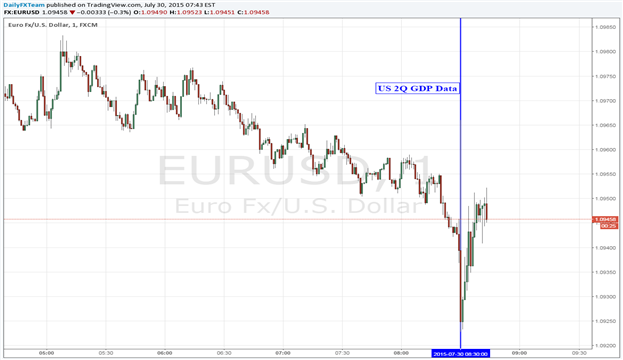 - EURUSD drops around -30-pips before stabilizing.

- Mixed data comes in after only modestly hawkish FOMC commentary.

Q2’15 US growth ticked higher from Q1’15, but still missed expectations coming in at +2.3% versus the +2.5% estimate set forward by Bloomberg News. Despite the headline miss, the data was overall taken positively, with the prior Q1’15 GDP figure revised up to +0.6% from -0.2% (annualized) following a revision to the statistic bureau’s reporting methodology.

The report, among the other data released at 12:30 GMT, confirmed the view set forth by Federal Reserve policymakers yesterday that the economy is “nearly balanced”: consumer consumption increased; the labor market (per claims data) remains tight; and gauges of inflation continue to lag.

Accordingly, we’re viewing today’s prints as not a sign that the Fed is step closer to raising rates in September, but it should keep the compass pointed in that direction and keep at least a Q4’15 rate hike on the table (in reaction to the data, market measures of interest rate expectations have continued to price in October to December as the most likely period for the Fed’s first rate hike, something that started developing post-FOMC yesterday).

Upon the release of US GDP data and prior revisions, the US Dollar initially jumped higher – particularly against the Euro. GDP, considered one of the more significant detractors from the US Dollar in recently months, provoked a fickle response in EURUSD, with a rebound after a plummet in the 1-minute candlestick at 12:30 GMT. EURUSD has recovered since finding support at $1.0925, setting a fresh low on the back of the GDP data. The pair was trading at $1.0948 at the time of writing.