The New Zealand Dollar has been the worst performing G-10 currency over the past 3 months. On average, the Kiwi declined more than 13 percent versus its major counterparts since April 27th. First place however, goes to its performance versus the British Pound. The NZD declined an impressive 24 percent versus the GBP from April to July. GBPNZD is trading at its highest level since November 2009.

While GBPNZD reached new highs, several indicators hit extremes on a weekly basis – as can be seen in the chart below. For starters the Consecutive Bars Indicator shows that the pair rallied for 11 weeks through 04/18/2015. Beforehand, the longest string of weekly gains/losses since January 2002 was 9. Looking at RSI, it peaked around 83 in the last week of June. This is the highest level RSI achieved over the past 13 years. Simultaneously, the Stochastic Momentum Index reached its highest level since 2002.

Recently the Reserve Bank of New Zealand maintained a dovish outlook, though significantly less than what the markets expected. Meanwhile, the Bank of England continues to hold rates steady, though Monetary Policy Committee Member Ian McCafferty warned that BOE “must not leave out hiking rates until it is too late.” Looking at central bank interest rate expectations over the next 12 months, overnight swaps are pricing in at least 25bps of easing from the RBNZ and 25 bps of tightening from the BOE.

Even though New Zealand’s central bank turned relatively hawkish compared with prior rhetoric, we are still looking for them to cut rates further. By contrast, their British counterparts are due to begin removing stimulus. So, in the grand scheme of things, it looks like the fundamentals favor a dovish RBNZ and a hawkish BOE outlook. Stretched readings on technical indicators can become more extreme or linger at current levels for some time yet. We need not necessarily see a reversal in GBPNZD just because the fundamentals and technicals are what they are. As economist John Maynard Keynes famously said, “the market can stay irrational longer than you can stay solvent.” 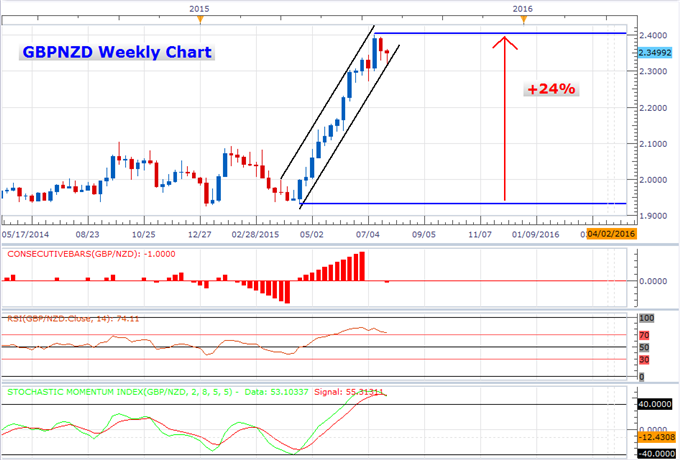