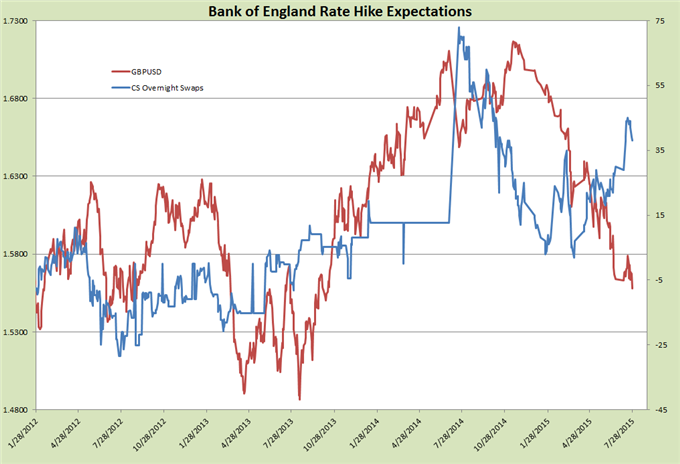 Hawkish BoE and Fed Look to Data for 2015 Liftoff

The 2nd Quarter GDP report from the UK met expectations in both the quarter-by-quarter and year-by-year read. On a yearly basis, the economy grew 2.6%, on the quarter it expanded 0.7%. While GDP is not the sole factor in a rate hike, the UK has seen a comparatively robust economic performance to offer support for a move to normalization on monetary policy. A few monetary policy members are pushing for a 2015 rate hike. The BoE will release its rate decision and minutes in the first week of August. For the rest of the upcoming week, UK consumer confidence is on tap to gauge economic sentiment. The current benchmark for the BoE is 0.50%.

The Federal Open Market Committee will announce the balance of its policy deliberations Wednesday. Expectations are for the current benchmark to remain at 0.25% - as GDP figures due later in the week are expected to give the first step towards a broader economic recovery that eventually lays the groundwork for the first hike. The US Dollar Index has rallied significantly over the past months and years in anticipation of the Fed’s ‘first mover’ status. The 2-year treasury yield – also a noteworthy rate forecasting measure – has similarly rose on greater economic confidence by and anticipation from investors. Several data prints later in the week such as Personal Consumption and Jobless Claims will further factor into the Federal Reserve’s decision as to whether they will meet the consensus economist forecast for a September liftoff. Should the central bank’s message maintain a tone of confidence in regards to tightening this year, the market may be forced to capitulate on its dovish view. Alternatively, should the group soften its call; justification for running skepticism may find the Dollar and Yields in retreat.