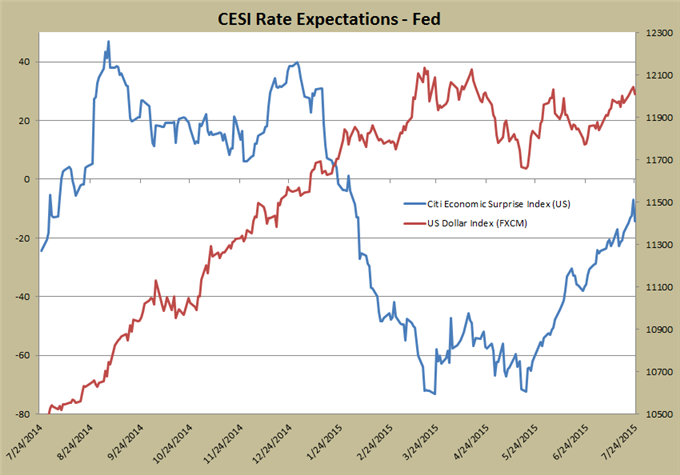 The Citi Economic Surprise Index (CESI for short) is a measure of the disparity between important economic data prints and their expectations, like those seen on the DailyFX Calendar. A higher index refers to economic indicators generally meeting or beating expectations.

As we enter the last week of July, several central banks will find their monetary policy views at critical junctures. The Federal Reserve and Bank of England are increasingly hawkish and have heavily implied growing expectations to tighten monetary policy by raising their benchmark interest rates in the not-too-distant future. In contrast, the Bank of Japan and Reserve Bank of Australia maintain a dovish tone – between the maintenance of the formers QQE program and the latter’s efforts to twice cut rates this year.

The United States economy notably contracted in the first quarter according to the government’s data. The question is whether this was a temporary slide as it was in 2014 whereby it quickly returns to expansion. From the CESI data below, the condition of the data over the months has gradually improved. Among the figures, recent employment figures show the lowest initial jobless claims since 1973, PMI activity surveys have posted stronger-than-expected figures and housing data has seen a few substantial ‘beats’. And while GDP figures - due next week - are needed to confirm a true rebound in growth, hawkish FOMC members have maintained a clear readiness for a tighter monetary policy. The FOMC will meet on July 29th to discuss its policy bearings.

The Bank of England witnessed a significant drop in the quality of growth measures through second quarter even as rate expectations managed to gain a stronger foothold in the market. As with the US, GDP figures for the UK are due next week and will play an important role in benchmarking the justification the BoE can muster for the support of its hawkish rhetoric as of late. 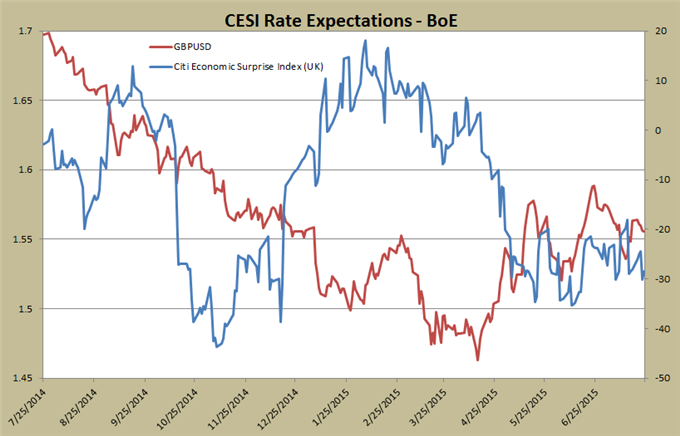 The Bank of Japan lowered its growth forecasts recently with its monetary policy update. Given perceived headwinds from China’s slowdown, the current year’s forecast was lowered to an ‘upper 1 percent’. The Bank of Japan – currently in the midst of a quantitative easing program - has seen the Yen depreciate against its major G10 counterparts. As the exchange rates stretch, the question becomes whether the current QE effort can keep the trend moving or whether an upgrade may be needed to fend off a market turn. To help weigh in on the need for ‘more’ Japanese CPI figures are due next week, which Governor Haruhiko Kuroda said should accelerate considerably from last month. If they do not, it may help justify an upgrade moving forward should it be deemed necessary. The BoJ is said to discuss further monetary policy accommodation later this year. 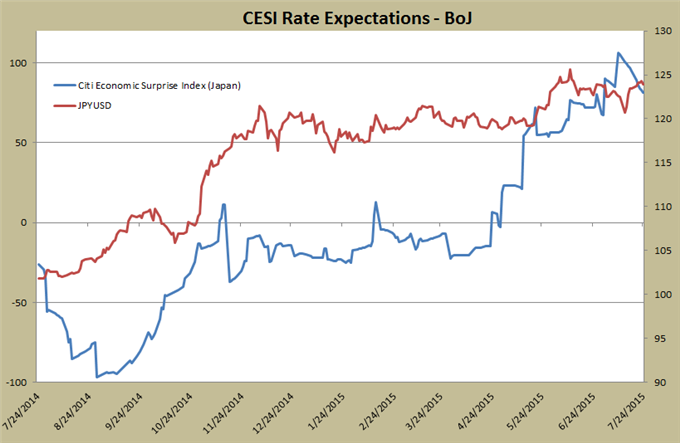 The Reserve Bank of Australia is keep the door wide open to further rate cuts according to Governor Glenn Stevens as financial stability becomes a greater concern. The RBA previously has cut rates twice this year attempting to stimulate growth. Recently, Australian CPI fell below expectations for the 2nd quarter gaining by 1.5% as opposed to a 1.7% surveyed expectation. Further, the AUDUSD experienced a 1% drop in the Asia session and continued its plunge through the European and North America periods. Rating’s agency Standard & Poor’s also threw gas on the fire when it commented it may lower Australia’s rating if a budget impasse did not clear 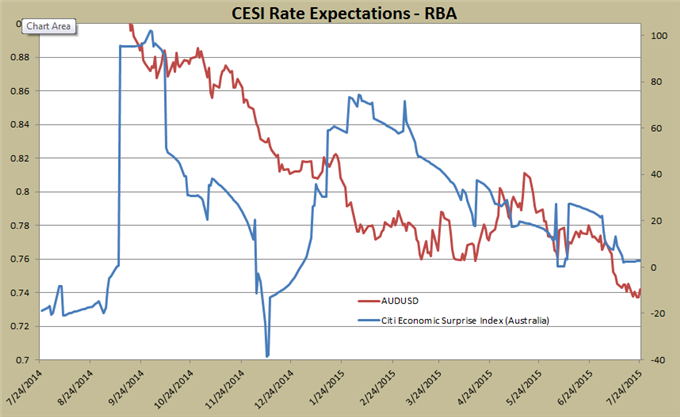