Economists are unanimous in their expectations for the RBNZ to cut rates for a second consecutive meeting – anticipation that has fed serious New Zealand Dollar weakness. The market projects the same level of confidence. According to overnight swaps, there is a 100 percent probability that the central bank cuts. Prior to last month’s rate cut the RBNZ hiked rates over a period in 2014. The current rate is 3.25% with a 25-basis-point cut due, dropping the benchmark to 3.00%, which would still qualify as the highest standard yield among G10 currencies.

NZDUSD responded to the June 10 decision to cut rates with a sharp 2.5 percent tumble (over 180 pips) and continued to decline in the days and weeks after. This level of volatility is not expected according to implied volatility measures, but the air of caution is still very clear. 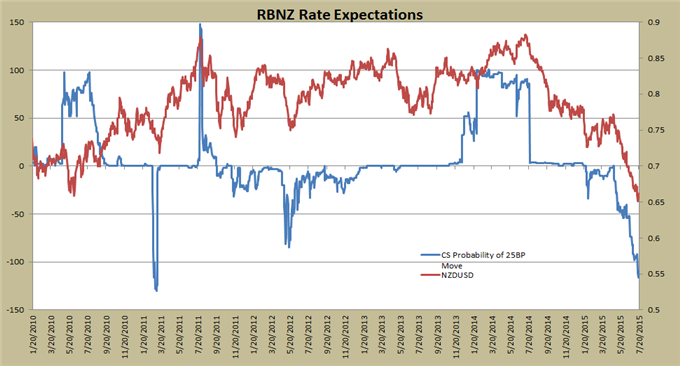 The Federal Open Market Committee has a rate decision planned for Wednesday July 29th, where Chairman Janet Yellen is expected to announce a stable fed funds rate of 0.25%. In a semi-annual testimony, Yellen and other FOMC authorities took a more hawkish tone regarding a hike in 2015. Some officials went as far as to say, September would be a possibility for a 25-basis-point move, with hikes gradually after. Markets are now weighing on the possibility, as the US Dollar index advanced to 12060 in July.

While a rate hike isn’t expected in the July 29th meeting, the FOMC is sure to discuss the possibility of a late 2015 increase. Commentary from the press conference as well as minutes – released after the meeting – will allow market participants to price a hike with more clarity. 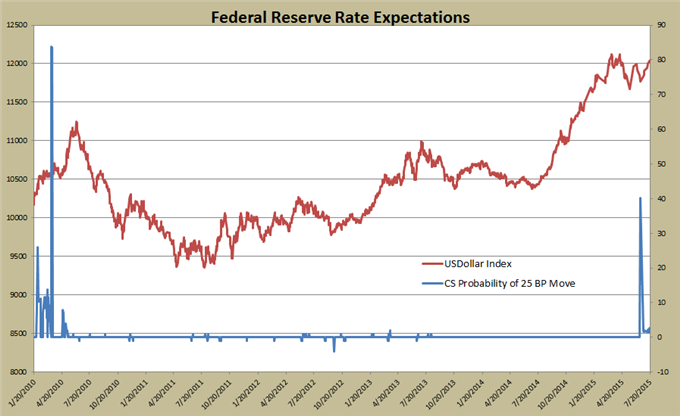 The minutes of the Monetary Policy Committee’s July policy meeting were released Wednesday morning at 8:30GMT. Bank of England officials voted unanimously to keep the central interest rate stable at 0.50%. Despite the conformity, the panel expressed growing favor for increasing the benchmark rate in the not-too-distant future. Hawkish committee members Ian McCafferty and Martin Weale have alluded to pushing for a small rate hike in 2015. Governor Mark Carney said remarked previously a better decision for when to begin raising rates would come at the turn of the year.

Pound weakness was a theme in the latter half of 2014; however, GBPUSD recovered well significant ground in 2015, particularly from May on. The pair has climbed from a five-year low in mid-April when it dipped below £1.460 to currently trading at £1.562.

Australia released its CPI data for the second quarter early Wednesday. Quarterly data posted a 0.7% rise in price pressures through the period, a modest miss on forecasts, but a substantial jump in pace over last quarter. On a year-over-year basis, inflation accelerated to a 1.5% clip - short of expectations, but a 0.2percentage point beat from the previous mark.

RBA Governor Glenn Stevens noted, “A period of somewhat disappointing…economic growth outcomes, and inflation that has been well contained has seen interest rates decline to very low levels.” Stevens was quick to add, a further rate cut is “on the table”. The RBA governor also stated his preference for a lower Australian dollar, which hit a six-year low this week in the AUDUSD pair. 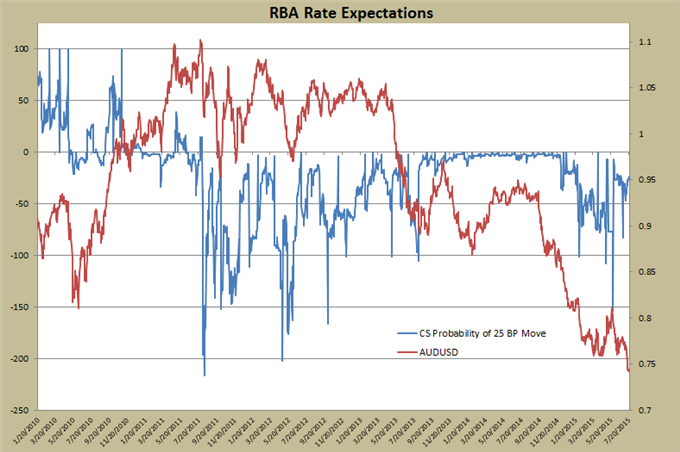 British Pound on Edge as BoE Does Little to Allay Concerns. Where to for GBP/USD?
Advertisement