The inability of Greece and its creditors to compromise in the last few months has set the stage for a vital meeting on SaturdayJune 27 at 12:00GMT. German Chancellor Angela Merkel argued “tomorrow’s meeting is of decisive character” as the June 30 payment to the International Monetary Fund (IMF) quickly approaches. Athens could potentially receive €15.5 Billion in bailout funds that would cover the bundled payment and give the Greek government greater scope to service its debts with payments to the European Central Bank (ECB) coming up in July.

Sentiments heading into this crucial meeting appear to be optimistic as European Commission President Jean-Claude Juncker sees “a real chance to conclude an agreement.” However, if Tsipras fails to clinch an agreement on Saturday and Greece is forced to default on the IMF bundled payment, capital controls may be imposed, which would prevent an immediate bank run, but the renewed threat for contagion may grip trader sentiment as Greece stands at risk of losing access to the ECB. 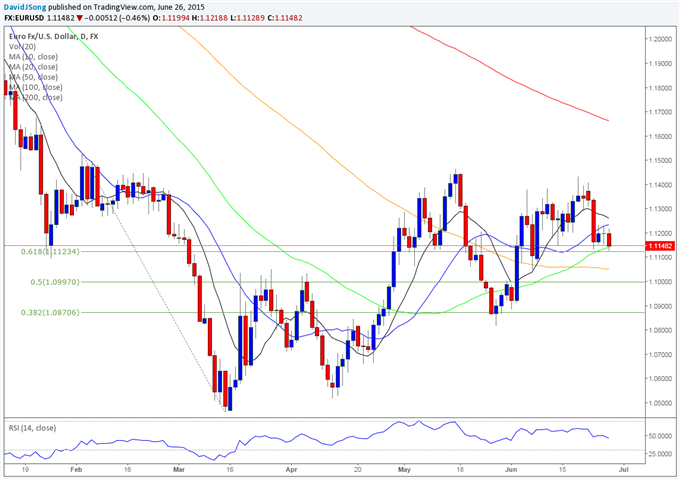 Despite the threat of a Greek event, recent price action in EUR/USD suggest market participants are largely optimistic on Greece especially as the pair preserves the opening weekly range and continues to close above key support around $1.1120-30, the 61.8% Fibonacci retracement. In turn, a positive development may spur a run towards the monthly high ($1.1435) amid the easing threat for contagion.

However, a greater threat for a Greek default/exit may produce increased volatility at weekly open along with market participants staging a flight to safety. A dismal outcome in Greece may lead EUR/USD to give back the advance from earlier this month ($1.0886) , with a growing risk for a resumption of the long-term bear trend.