The New Zealand Dollar has been in a long-term downtrend versus its US counterpart since July 2014. This is around the time when the Federal Reserve was in the process of reducing its bond purchasing program, and began dissipating its dovish monetary policy stance. Simultaneously, the Reserve Bank of New Zealand reached the end of its tightening cycle when it raised the benchmark lending rate by 25 basis points for a 4th consecutive meeting and proceeded to hold rates steady. Since then, the Kiwi experienced an uptrend which lasted from early February up until the aftermath of RBNZ’s April monetary policy announcement.

On April 29 2015 the Reserve Bank of New Zealand took center stage and announced it would not consider a rate hike, and showed indications of a rate cut in the future. The Kiwi declined more than 1.1 percent alongside with front-end government bond yields. Follow-through was met with NZDUSD breaking support on May 6 established by its bounce in early February, (See Chart Below). The central bank cut its benchmark lending rate by 25 basis points in June for the first time since January 2011. In the aftermath, the New Zealand Dollar declined more than 2.4 percent versus its US namesake alongside with front-end government bond yields.

As of today, the Kiwi declined for 8 consecutive weeks. A 9th week of losses would be its first over the past two decades. On the docket, a Fed policy announcement later today is likely to give forward guidance for the US Dollar. If the US central bank gives a more hawkish tone, the Kiwi may continue its long-term downtrend since RBNZ has turned dovish very recently. In fact, the markets are now pricing in a 52 percent chance of a 25 basis point cut from RBNZ during July’s rate decision. However, such a scenario may leave room for error. Most long-term trends experience temporary reversals. Thus it can be helpful to keep an eye on oscillators such as the Stochastics Momentum Index to help gauge if a pair might be readying to change direction.

The Stochastic Momentum Index is a free indicator traders can use to gauge momentum. Using it alongside the Kiwi on a daily basis, positive divergence has emerged since the pair’s short-term recovery. When the NZDUSD resumed its downtrend, the Stochastic Momentum Index touched a higher low in the oversold territory (x < -40). Currently the indicator appears to be heading towards the oversold territory, though there is a possibility it may stall and change direction. When the oscillator inevitably crosses -40, traders should watch if it fails to break -50 and exit the oversold territory. Such a scenario may be a strong indication of a possible NZDUSD reversal forming. 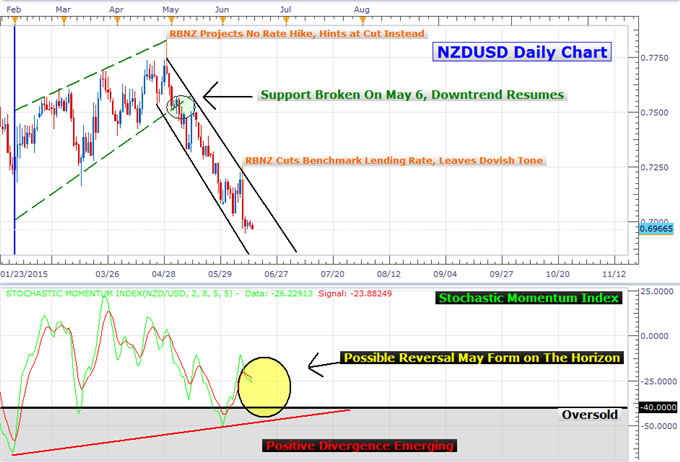