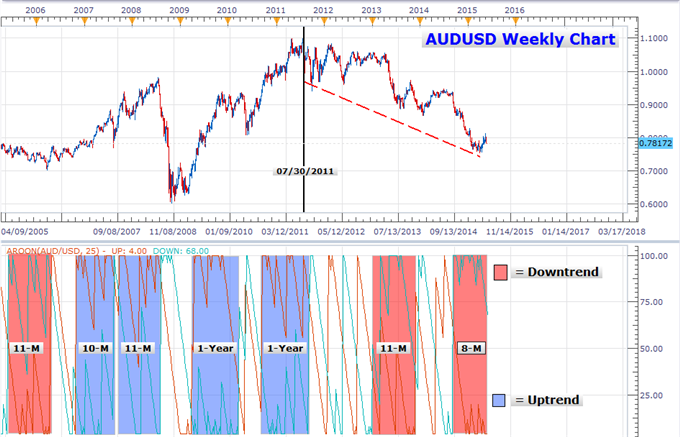 The Aroon Oscillator is a free indicator traders can use to identify the strength of a trend. Using said indicator on a weekly Aussie chart, we can find five instances of consistent up or downtrends lasting almost one year from 2005-2011. This reoccurring theme was the most prominent after the Great Financial Crisis of 2008 when the Australian Dollar greatly appreciated against the US Dollar from its low at 0.60 in October 2008, to its substantial high of 1.10 in July of 2011. Since then, these instances have become significantly less common despite a clear-cut downtrend over the long term.

The AUDUSD has been on an uninterrupted downtrend since September 6th 2014 as the Reserve Bank of Australia maintained a dovish outlook, (See chart below). While the Aussie has been climbing higher since the beginning of April, the pace has not been convincing enough to mark a change in trend on the Aroon Oscillator. Recent economic events out of Australia may have been the catalyst behind Aussie’s push higher. RBA’s positive stance on household demand and employment growth likely hinted that the chances of further easing may be relatively low in the upcoming months. In addition, RBA’s Deputy Governor Lowe remarked that the central bank probably won’t cut the cash rate further in the near term.

Since the pair is still considered to be in a strong downtrend by the indicator, there might be a chance the pair will push further down to test the March 30th low of 0.7532. In fact, The Aussie declined more than three percent last week; marking is its strongest drop since January 19th. Should the Aussie resume its downtrend and fall below its March 30th low, we will witness a 6-year low. Though in the near term, the Aussie is expected to resume its recovery as RBA rate cut bets dwindle, and expected US 1Q GDP revisions will not boost Fed tightening. The Aroon Oscillator is a handy tool which allows traders to identify strong trends and we can use the information to better predict where the pair will go in the long-run.