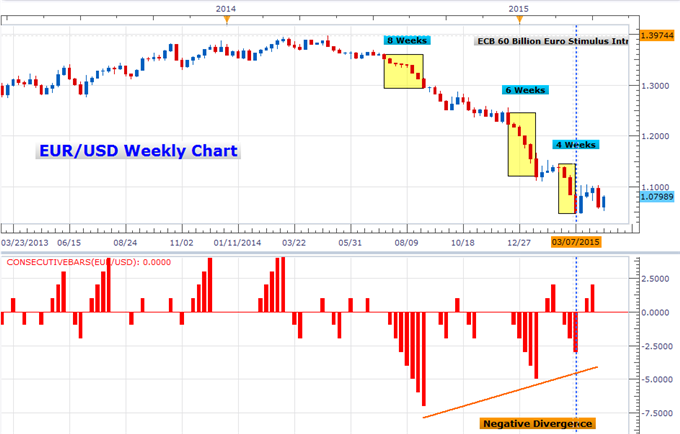 EURUSD Running Out of Steam On the Hint of Negative Divergence

Since 2005 it has been a rare event for the EURUSD to rally or tumble for more than 6 consecutive weeks. When the pair began its dramatic 34% plunge almost one year ago, it experienced its first 8 consecutive week tumble for the first time since the Euro officially began trading. Since that record breaking move though, the bouts of selling have proven less persistent. This has in turn created what is referred to as a ‘negative divergence’. As the EURUSD continued its decline, the bearish performance has unfolded in smaller and smaller waves. We can identify these movements using the DailyFX Consecutive Bars Indicator. This app allows traders to see consecutive periods of gains or declines.

A divergence in the consistency of the EURUSD’s declines does not necessarily indicate that a reversal is at hand (this is a weekly chart, so timing needs to account for the periodicity at the very least). Given the proper fundamentals and speculative appetite, the pair can continue its decline; but its progress may likely be more measured and present a risk of more readily reversing should conditions shift.

Looking at 1Q 2015 forecasts for the Euro and US Dollar produced by the DailyFX Analysts, the Fed’s hawkish shift in tone alongside ECB’s stimulus measures will create pressure to push EURUSD downward. The European Central Bank introduced its 60 billion Euro per month stimulus on March 9, 2015. Greece’s financial situation still remains a looming issue that is affecting the Euro as well. Recently Dutch Financial Minister Dijsselbloem said it’s too soon to reassess Greek debt relief, though he trusts Greece’s financial minister Varoufakis. ECB’s Mario Draghi also commented that Euro-area outlook is brighter than it has been in the past several years and that recovery will broaden as well as strengthen. In contrast, the Fed’s Minutes from March 17-18 FOMC meeting showed that officials are divided on a June rate hike – though the majority still favors a hike in the foreseeable future. Changes in monetary policy – they are quick to state – are data dependent.

As bearish appetite dries up; the chance of a rebalancing grows. After the 7 consecutive week decline through 10/16/1999, EURUSD entered into a similar period of negative divergence. This ultimately resulted into a correction of roughly 14 percent before the pair eventually continued its downtrend. Though past performance is not indicative of future results, the DailyFX Consecutive Bars App can be used to find extreme movements and we can incorporate these considerations into our analysis.