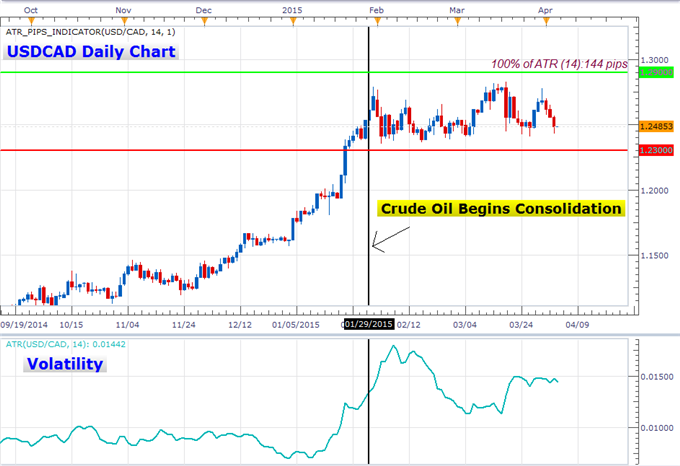 Loonie Volatility Near a 5-Year High as Crude Oil Consolidates

Finding correlations between currencies, equities, and commodities can help support a trader’s fundamental view. Recently, the Dollar-Canadian Dollar exchange rate and crude oil have shown an exceptional, negative correlation. Even though USDCAD and crude oil hold a negative correlation, it is not necessarily a direct relationship. The commodity is denominated in US dollars, as is USDCAD. A remarkable rally from the Dow Jones FXCM USD Index since July alongside crude oil’s 50% decline have helped amplify the correlation. Whether we believe that the value of the commodity contributes to the exchange rate changes or they are tied to a third, there is a strong relationship between the two. In fact, over the past two months, the correlation between USDCAD and crude oil futures has notched an impressive -0.74 (strongly inverse).

USDCAD is experiencing a pause in its long term up trend that dates back to September 2012 as crude oil similarly consolidates at 6-year lows. Despite this plateau, USDCAD’s average daily movement has continued to rise to its highest levels since June 2010. We can see these fluctuations using the ATR Pips Indicator. This app is designed to assist traders in reading volatility to better evaluate trade conditions (such as how far to place stops and targets). This rise in activity comes alongside a period of price consolidation between the 1.2300 and 1.2900 figures as bulls and bears increase their fight for control.

The Loonie finished roughly one percent lower this week as March’s rather disappointing US Non-Farm Payrolls took the spotlight on Friday. Bank of Canada’s Governor Stephen Poloz commented last Thursday that the CPI target remains the best focus of monetary policy and housing markets remains a key vulnerability. Top event risk coming out of Canada next week will be the release of March’s labor force data. The unemployment rate is expected to hold steady at 6.8%. In addition, the country is expected to start 175K housing units for the period of February versus 156.3K in January.