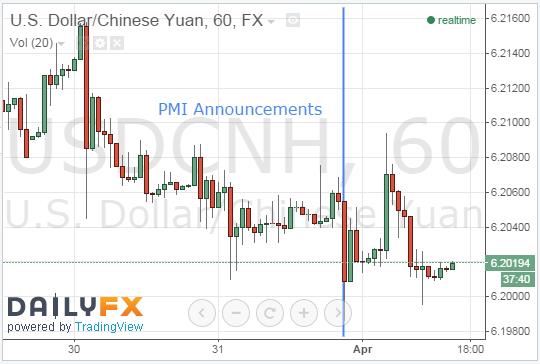 The CNH appreciated against the USD as China’s official gauge for its manufacturing industry in March 2015 edged slightly above leading economists’ expectations of 49.7 percent as well as the previous period’s reading of 49.9 percent and came in at 50.1 percent. The official manufacturing purchasing manager’s index (PMI) rose above the contractionary/expansionary nexus, to move into the expansionary parapet. The competing index compiled by HSBC, which gives more weight to smaller companies remained in a state of contraction with the most recent figure crossing the wire at 49.6 percent, however stayed above leading analysts’ expectations of 49.3 percent, and ahead of the previous period’s reading of 49.2 percent. Meanwhile non-manufacturing PMI which encompasses services such as construction and real estate remained in expansion with March 2015’s figure of 53.7 percent, only 0.2 percent lower than the previous period’s reading.

After a string of disappointing data to come out of China in the past several months, manufacturing and non-manufacturing PMI figures finally showed some hope. Despite the numerous easy-money policies, ranging from lowering the reserve requirement, to the countless benchmark rate cuts, the Chinese economy has been plagued by deflation, a poor housing market, and stagnant and falling growth. These figures have provided markets with some optimism; large firms as shown by the expansionary manufacturing PMI figure have taken advantage of such low rates and are now cashing in.