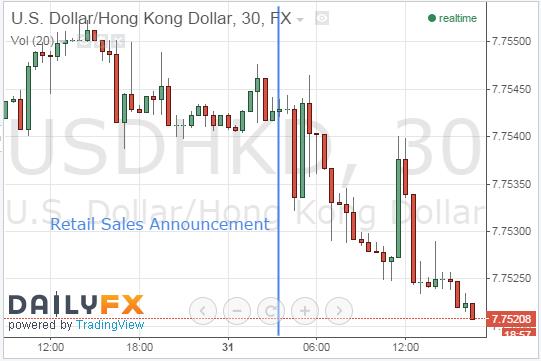 The HKD Fell as Hong Kong retail sales value year-on-year (YoY) increased dramatically in February 2015, coming in at 14.9 percent, ahead of leading economists’ expectations of -4.5 percent, and well above the previous period’s revised reading of -14.5 percent, according to the Census and Statistics Department of Hong Kong. Despite February 2015’s optimistic news, for the first two months of 2015 taken together, total retail sales decreased by 2.0 percent in value compared to the same two month period in 2014. Following netting out the effect of price changes over the same period, the volume of total retail sales in February increased by 18.2 percent, soaring past leading analysts’ predictions of 2.4 percent as well as the previous period’s figure of -13.9 percent. Again when taken together, retail sales in the first two months of 2015 decreased by 0.3 percent in volume when compared to the same two month period in 2014.

When comparing the combined total sales for January 2015 and February 2015 with the same two month period of 2014, the value of sales of commodities in supermarkets increased by 3.7 percent with the sales of medicines and cosmetics increasing by 8.3 percent. Food, alcoholic drinks and tobacco increased by 15.3 percent, with electrical goods and photographic equipment rising by 12.7 percent. When interpreting these figures, it should be noted that retail sales tend to show increased volatility before and after the Chinese Lunar New Year, and due to the current positioning of this year’s Lunar New Year’s date in February, it makes more statistical sense to combine both month’s retail sales figures.