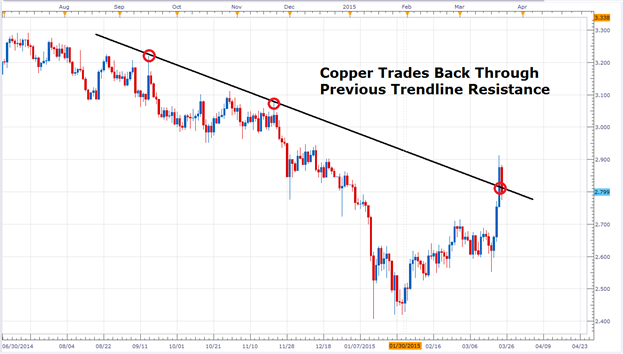 Copper Trades Back Through Resistance as China’s PMI Contracts

Copper prices pulled back Tuesday, on news that China’s PMI dropped to an eleven month low in March. However, the initial drop may be softened in response to the ensuing release of the better-than-expected U.S. PMI and New Home Sales data. The reason: together China and the United States consumed 10.37 million metric tons of copper in 2013 deeming them the two largest importers of refined copper.

Any change in the manufacturing sector’s momentum, weighs heavily on Copper’s price, as the metal is commonly used as an electrical conductor for electronic and communication devices, as a construction material, and as a component in industrial machinery and equipment. Thus the contraction in China’s preliminary manufacturing PMI, negatively affected the price of the base metal.

In declining from 50.7 to 49.2, employment decreased at a faster rate while new orders, stocks of purchases, and quantity of purchases decreased after increasing in February. All encompassing, the muted demand will likely fuel speculation of additional stimulus measures. Final figures will be released on April 1st.

Working to pull prices in the opposing direction, the preliminary manufacturing PMI increased in the United States to 55.3 from 55.1. In deifying expectations, which called for a decline to 54.3, the index rose at its fastest rate since October 2014. The employment, new orders and output indices all accelerated in-spite of the struggling export sector.

Copper demand may also be elevated by the continued surge in New Home Sales. Disregarding the Northeast’s cold weather, sales increased by 7.8% in February. With the addition of 539 thousand new single family homes, actual sales surpassed the expected figure of-3.4%. The underlying strength brought the indicator to a 7 year high.