Copper Consolidates as Fridays Gains are Negated by U.S. Data

After advancing on Thursday and Friday, copper pulled back this week in lieu of disappointing U.S. production data and anticipation over the upcoming Federal Reserve meeting. The uncertainty has seemingly overwhelmed the positive assurances given by Premier Li Keqiang of China, following the conclusion of the National People’s Congress on March 15th.

During a press conference held at the conclusion of the annual NPC session, Premier Li Keqiang sought to quell fears over China’s economic growth prospects. In fielding questions, he highlighted the government’s commitment to keep growth on track, citing the institutions ability to ramp up macroeconomic regulations to subdue any adverse effects on employment and the national income.

Furthermore, the Premier expects Chinese markets to see sound real estate development this year and advancements in bilateral investment negotiations with the United States. This upbeat tone on capital markets allowed copper to temporarily advance before settling at a lower price this week.

In pulling prices down, industrial production and builder confidence fell in the nation consuming the second largest amount of copper. U.S. factory production fell for the third straight month, moving down 0.2%. A strong U.S. dollar has made goods less competitive, leaving capacity utilization 1.2 points below its long run average at 78.9%. Demand concerns were further bolstered by a drop in the housing market.

Reported by the National Association of Home Builders, Builder Confidence dropped 2 points in the month of March. Amongst the three subgroups, current sales conditions fell 3 points to 58 and buyer traffic dropped 2 points to 37. The index however, still remains positive at 53. 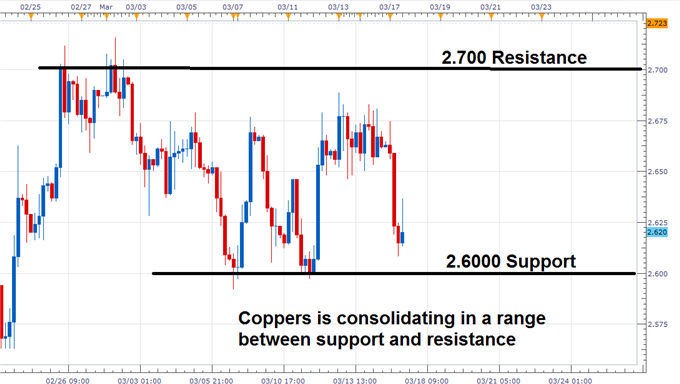