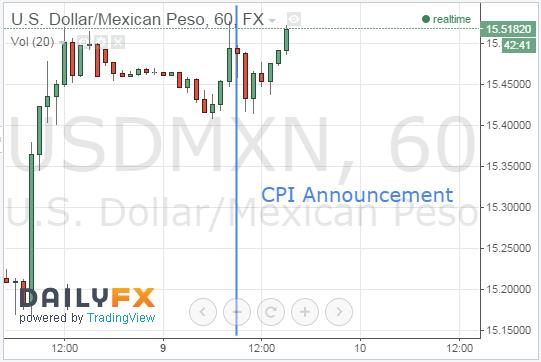 The MXN appreciated against the USD as consumer price inflation (CPI) statistics for Mexico were announced today by the National Institute of Statistics and Geography. CPI month-on-month increased dramatically in February 2015, up .19 percent as compared to January 2015’s figure of -0.09 percent, however came in under leading economists’ expectations of 0.22 percent. Core CPI, which excludes energy and fresh fruits and vegetables, also saw an increase in February 2015 by 0.34 percent, just below leading analysts’ expectations of 0.37 percent, however up from January 2015’s reading of -0.03 percent. CPI year-on-year rallied to 3 percent, just under leading economists’ expectations of 3.03 percent, however below last period’s figure of 3.07 percent.

The results from February 2015 brought the 12 – month inflation rate in line with the Bank of Mexico’s 3 percent inflation target. The Central Bank, which has kept interest rates at a record low 3 percent since mid – 2014, expects annual inflation to fall below their 3 percent target by the end of 2015. Investors should watch for interest rate hikes by the US Federal Reserve as an indication of when the Bank of Mexico will also raise rates. On the other hand, investors should also watch for tighter fiscal policy cuts in reaction to Mexico’s reliance on state-owned oil producer “Petroleos Mexicanos” and the possibility of a drop in federal spending, due to continuous falling world oil prices. A drop in federal spending could potentially lead to looser monetary policy.