EUR/USD Slammed Below $1.0900 as February NFPs Blow by Forecasts

- US unemployment rate ticks lowers to 5.5% despite participation rate falling.

The US Nonfarm Payrolls headline reading surged to +295K for February, a robust figure, above the three-month average of +288K. Overall, the headline numbers were mostly good: the actual beat estimations by +60K; the prior was revised slightly lower by -18K to 239K; and the unemployment rate sunk to its lowest level since May 2008 – a fresh post-recession cycle low.

Wage data was actually the most discouraging aspect of this report, insofar as real wage growth has fallen, another sign that inflation pressures are abating. The magnitude of this matter is an entirely different issue in context of recent market developments: the strong US Dollar since July 2014, coupled with energy prices having been cut in half, has helped bolster purchasing power for the US consumer.

The Fed has stated its desire to see wage growth accelerate before it tightens policy; but it was also made clear in the January minutes in recent weeks that rate hikes could occur even if inflation is floundering. For now, as the Fed doesn’t consider the drop in inflation anything more than transitory, it’s unlikely that the wage figures ruffle too many feathers, at least for the US Dollar.

Here’s a summary of the data this morning that’s responsible for US Dollar price action: 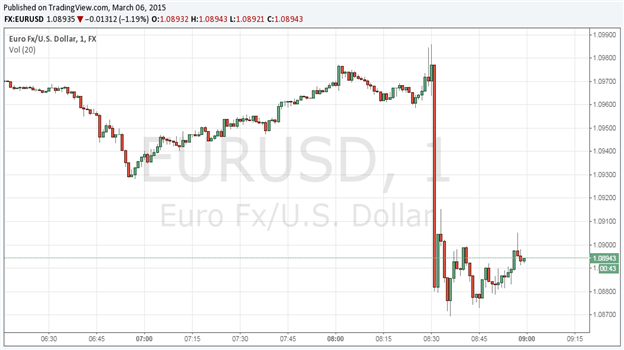 EURUSD rallied to a high of $1.0986 ahead of the report before retracing all of its gains and moving back to fresh weekly, monthly, and yearly lows. Price bottomed out at $1.0869 in the 30-minutes after the report. USD strength has been widespread in the wake of the report, although gains have been trimmed: EURUSD last traded at $1.0894 at the time this report was written.

Read more: Preview for NFPs and Trade Setups in USD-pairs