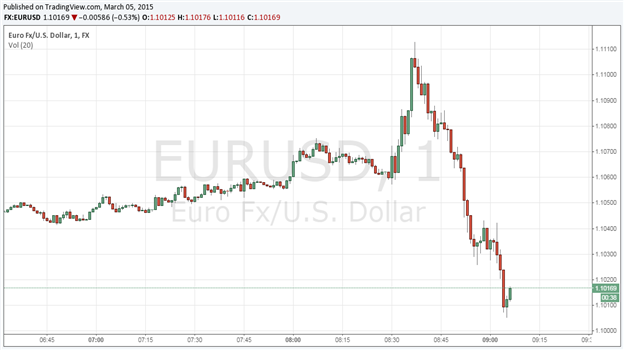 The Euro has been on a rollercoaster this morning thanks to ECB President Mario Draghi’s press conference. Although the main interest rate (0.05%) and the interest rate corridor (-0.20% to +0.30%) were held unchanged as expected, traders were given more than enough ammunition in the press conference to drive the EURUSD to fresh yearly lows.

Initially, the ECB’s GDP and CPI forecasts boosted the Euro across the board, with EURUSD rallying about half of a percent back above $1.1100. Yet the flaws in the ECB’s stategy appeared quickly once President Draghi started his Q&A. The ECB expects that its QE program, set to begin on March 9, would solve the region’s problems; even though the balance sheet would only rise back to its early-2012 levels, which obviously didn’t mark the end of the Euro-Zone crisis. President Draghi also urged fiscal policymakers to do more on the reform side, even though his “whatever it takes” promise in July 2012 removed the very incentive for fiscal policymakers to do anything unpopular: higher yields on sovereign bonds.

When President Draghi revealed that there would be a cap on the QE program – the ECB would not buy bonds whose yields were below the interest rate corridor floor of -0.20% - the Euro hit the skids. Perhaps this is an indication that market participants feel there simply won’t be ample supply of short-dated debt for the ECB to purchase in order to make its QE program viable; thereby boosting the possibility that the ECB will have to enact more easing down the road, as its current program eventually falls short of its goals. The icing on the cake was when President Draghi admitted that the ECB’s QE program could extend past September 2016, seemingly in conflict with the earlier assessment that the ECB would achieve its mandate of price stability by 2017.

See the DailyFX Economic Calendar for Thursday, March 5 2015 for an overview of today’s market-moving data releases.

The reaction around the press conference has been quite violent, with a 108-pip range since 12:30 GMT. EURUSD initially rallied on the optimistic staff projections, but quickly plummeted after President Draghi’s Q&A session made it clear the ECB wasn’t done easing, and was intending to purchase bonds with negative yields in its QE program. EURUSD peaked at $1.1113, traded as low as $1.1005, and was last seen at $1.1017 at the time this report was written.