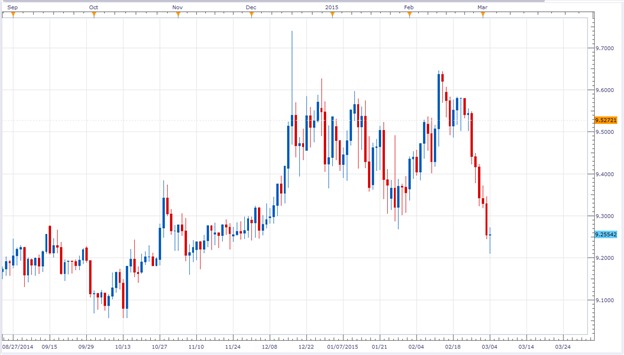 As indicated by the PMI Manufacturing and Services Indices, economic activity in Sweden slowed during the month of February. After swiftly appreciating against the Euro, due to a better than expected 4Q GDP report, the Krona has since paused today in the wake of Swedbank’s Services Report. While activity remains in an expansionary state, the slowdown may weaken the Krona, potentially aiding the Riksbank in staving off negative inflationary pressures.

On Monday, the Manufacturing PMI Index slipped 1.9 points, settling at 53.3. With the industrial sector still in recovery mode, the New Orders component fell by 3.3 points to 52.8 while the Production index dropped from 57.0 to 54.9. Sinking to the lowest level since June of 2013, the Supplier Price element fell to 43.2, further compounding the slowdown.

As indicated in a report released today by Swedbank, Sweden’s services sector also fell subject to a slowdown in economic activity. The index narrowed from 57.9 in January to 56.7 in February. After surveying 200 companies, analysts found that the New Orders index (weighted at 35%) fell from 59.0 to 56.8 while the Employment index (weighted at 20%) fell by 2.4 points to 56.4. Furthermore, the Suppliers Price component (weighted at 20%) fell well below the 2014 average, dropping from 54.8 to 50.7. Moving in the opposite direction, the Business Volume component increased 1.7 points to 59.9.