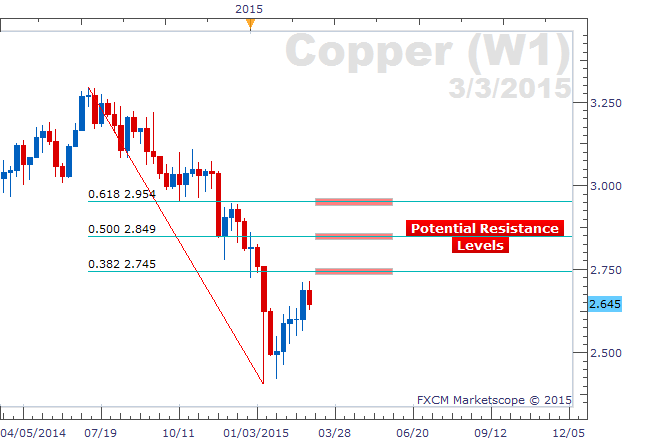 After reaching a 7 week high on Saturday, the price of copper has since retreated, falling 5.2 US cents. While favorable PMI readings and increasingly aggressive measures taken by the People’s Bank of China have elevated prices, a stronger US dollar and overarching concerns of China’s long-term growth prospects have given copper reason to pause. The hesitation is reflected in the price of copper futures.

A shift within the PBOC resulted in a 25 bps rate cut on Saturday. The drastic action is the third measure taken by the bank to increase liquidity and intensify economic activity; the financial institution previously cut rates in November and lowered the reserve-requirement ratio among lending institutions last month. When assessing the strength of the global economy, the central bank’s initiative elevated demand prospects, momentarily providing copper with support.

Copper was further elevated on Monday following the release of HSBC’s final manufacturing PMI data. After a flash reading of 50.1 last week, the index improved to 50.7 based on a stronger than expected expansion in the output and new orders sub-components. However, while production benefited from and upsurge in business volumes, analysts warn that export demand decreased for the first time in 10 months and the employment index weakened, albeit at a slower rate.

Perhaps upon reflection the news was viewed from a different perspective, sending copper lower. The rapidity with which policy was adjusted has led analysts to believe that additional easing measures will ensue. As a result, growth rate concerns remain steadfast for the world’s larger consumer of copper. Furthermore, the US dollar index strengthened following Saturday’s news, making copper a less attractive investment.

This bearish stance is reflected in the price of copper as quoted on the COMEX division of the NYMEX; the red metal is down 4.2 US cents for delivery in May. Prices are also down for deliveries in June, July and August. The next event likely to influence the price of Copper –China’s services PMI, set to be released by HSBC on Wednesday.