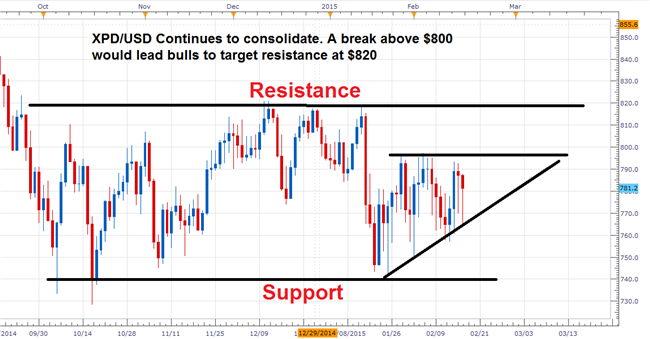 During South Africa’s prolonged industrial strike Palladium appreciated 31% in 2014, outperforming the more well-known precious metals. However, since its peak in early September, the silvery-white metal has retraced by as much as 20% to trade in a 93 dollar range. The pairs oscillating movement has most recently been driven by a recovery in South Africa’s mining sector counterbalanced by a surge in auto sales.

On Thursday Statistics South Africa reported an increase in December’s production when measured month-on-month (+0.9%) and quarter-on -quarter (+3.1%). Specifically, the production of Platinum Group Metals increased by 2.1 and 2.7 percent respectively when measured on a monthly and quarterly basis. While production remains down 14.9% year-on-year, output has substantially improved from July when productivity was down 45.2%.

Also reporting an increase in mined palladium—Russia, South Africa’s counterpart in producing 80% of the world’s palladium. Norilsk Nickel, the leading global producer of nickel and palladium, reported a 3.0% (y/y) increase in the metal's production at the end of 2014. Furthermore, the group announced their intent to maintain the same full year target in 2015—2,580 to 2,610 thousand troy ounces.

Partially offsetting the increase in production, a surge in auto sales for which palladium is used as an auto catalyst. According to a report published by Scotiabank total car sales increased internationally by 3.4% in 2014. The momentum has carried into 2015; with the best annual start in 6 years, Canadian auto sales reached 1.80 million units in January while a strong labor market and high consumer confidence kept sales steady at 16.6 million units in the United States.