One More Day for the Greek Drama?

- Troika representatives will be present at the meeting.

- Talks of a 6-month extension have helped lift EUR/USD.

There’s one day is left until the critical meeting of the Eurogroup, regarding the Greek Debt issue, and the uncertainty for the result is higher than ever. The meeting will be held at 16:30 and ECB’s President Draghi will also be present alongside Christine Lagarde, the Managing Director of IMF. The new Greek government will be represented by Finance Minister Varoufakis who will unfold the Greek plan for an extension or as they call it “a bridge program”.

This plan has been partially mentioned by PM Tsipras in his opening speech during the parliamentary procedure for a vote of confidence, but was also enriched after this week’s contacts of the Greek government with European officials. The Greek side, having postponed a few of its pre-election promises, seems now to emphasize on structural reforms and even accepts to proceed with the 70% of those included in the old program, as Varoufakis yesterday stated in his parliamentary speech.

To that extent, there has been announced that Secretary-General of OECD Angel Gurria, will meet Greek Minister Stathakis in order to form a new toolkit of adjusted Greek reforms. Despite these goodwill gestures we can still track contradictory statements from the Greek government’s side. A perfect example is Minister Lafazanis, who represents a radical left part of Syriza, and during his speech in the parliament he refused any continuance of the current bailout program and insisted in the cancelation of several important privatization projects that were on the way.

In addition, earlier today, there have been several rumors indicating that there has been a 6-month extension granted from the Europeans, which led to a sudden rebound on the EUR/USD and to a hike of the Greek stock market Index as well. However, those rumors were not confirmed and we should expect increased speculation around tomorrow’s meeting to create intense market conditions and volatility with no clear trend. It is important to mention though that the general belief that has been formed among the public here in Greece, is that the Greek government will not pursue a full confrontation with its European counterparts, and will eventually compromise after getting improved terms for the program.

How likely is that though? At this point it seems to be the most likely scenario, bearing in mind that PM Tsipras has to urgently deal with the lack of liquidity that threatens the Greek systemic banks, which are solely dependent on the ELA of the Greek Central Bank, which however, needs to be reauthorized every two weeks. Greece is on the heels once again and doesn’t have much of a leverage, but continued “kind gestures” from its government could lead to another infamous European compromise. 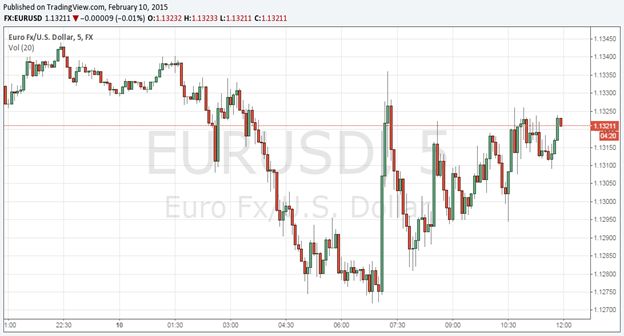