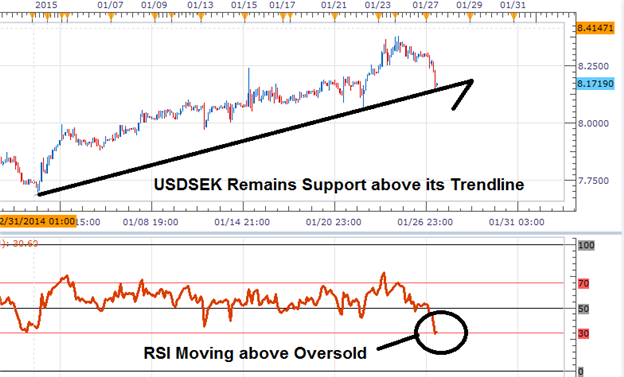 With their balance sheet in the black, Sweden netted a trade surplus of SEK 0.4 billion in December, bringing the 2014 total to SEK 21.1 billion. However, while positive the surplus remains substantially below that of the previous year due in part to changes in trade patterns and price indices.

When compared to December of 2013 and November of 2014, the overall Producer Price Index decreased by 0.1% and 0.3% respectively. The greatest influence came from the Import Price Index which decreased 3.4% (y/y) and 2.0% (m/m). Furthermore, within the Price Index for Domestic Supply, energy related goodsslipped in price by as much as 19.1% (y/y). Slowing the index’s decline, an increase in the price of capital (+2.5%) and consumer (+1.8%) goods.

Factoring in the yearly decline in producer prices, 2014’s trade surplus (SEK 21.1 billion) came in well below the SEK 51.8 billion recorded in 2013. Broken down, exports (valued at SEK 1126.9 billion) increased by 3% while imports (valued at SEK 1105.8 billion) increased by 6%. Variation in the month of December was smaller with exports valued at SEK 91.2 billion and imports valued at SEK 90.8 billion. Data from this month also hints at a shift in trade directions; trade with countries outside of the EU resulted in a surplus of SEK 12.9 billion while trade with countries inside the EU resulted a deficit of SEK 12.5 billion.

In approaching its ascending trendline the USDSEK entered into oversold territory, as indicated by the RSI reading below 30. With subsequent candles, if RSI moves back above 30, it may signal a reversal back in the direction of the general trend.