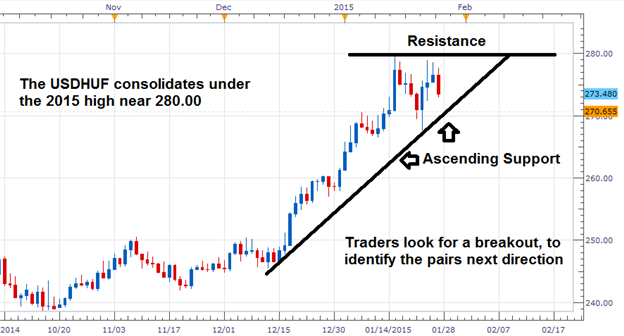 On Tuesday, January 27th the Hungarian Central Bank elected to leave the base rate unchanged at 2.10%. Throughout the deliberation, the Monetary Council took into consideration the effects, of decisions made by central authorities throughout Europe, on international investor sentiment and the domestic economy. The discussion resulted in the continued notion that Hungarian economic growth is likely to improve as disinflationary pressures subside and domestic demand grows.

Authorities cited the nation’s high external financing capacity and declining external debt as a moderator for the high market volatility generated by the plagued Russian financial market, uncertain Greek Election, tumultuous SNB decision, and ECB QE launch. As a result, Hungarian banks have not incurred any additional systemic risk. Furthermore, in preventing a negative shock, foreign denominated currency mortgages were converted at an established rate, in conjunction with the HNB, back in November of 2014.

In addition to buffering itself from external shocks, the domestic economy has also shown signs of improvement. Industrial production grew by 5.8% in November, contributing to the EUR 76 million increase in the trade surplus. Furthermore, retail sales remained steady at +0.5% in November, as average gross earnings for the year increased by 2.7%. With continued improvements in trade, capacity utilization is expected to gradually improve, bringing the inflation rate up to the target in the mid-term.