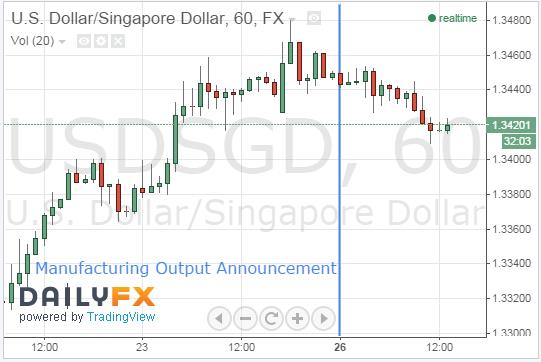 The Singapore Dollar strengthened as better than expected manufacturing output data was released by the Department of Statistics of Singapore. Manufacturing performance in December 2014 contracted on a year-on-year basis by 1.9 percent, however slower than what leading economists’ surveyed by Bloomberg had expected at -3.4. The figure also contracted at a slower rate than the previous year’s revised reading of -2.1 percent. On a seasonally adjusted month-on-month basis, manufacturing output grew 1.80 percent in December 2014 compared to November 2014. The larger than expected growth soared past leading analysts’ expectations of 1.5 percent and remained significantly higher than November 2014’s figure of -1.0.

Increased manufacturing output stemmed largely from growth in a variety of industrial sectors. According to the Department of Statistics of Singapore, the precision engineering sector increased 10.9 percent compared to the same month a year ago. Machinery and systems also increased by 12.9 percent, fueled by higher output in mechanical engineering work and semiconductor equipment. Electronic connectors and optical instruments grew by 8.4 percent. As a whole the precision engineering sector grew by 3.8 percent in 2014 compared to 2013. In line with this strong growth, biomedical manufacturing rose 8.8 percent compared to 2013.