On Wednesday the BoC created short term volatility, shocking the markets with a 0.25 bps cut in the overnight rate. The move lower to 0.75% is the first move away from the 1.0% mark held since April of 2009. According to statements made by Central Bank Governor, Stephen Poloz, the deviation was made in response to the uncertainty surrounding oil prices. While the move warrants upside potential, it does not come without financial risk, possibly even harboring an element of contagion.

As a net exporter of oil, Canada becomes the first of the G7 countries to lower their cost of financing as a result of global commodity pricing. The bank sees the rate cut as aiding both energy and non-energy exporters alike. The first group will find relief in their US Dollar denominated products, while the latter should see a rise in demand for their relatively cheaper goods/services. The benefits however do not end with the manufacturing and mining sectors. Within the financial sector banks can both borrow and lend at cheaper rates—an exchange that proves to be a double-edged sword.

While benefiting banking institutions, the lower rates simultaneously leave the financial system vulnerable to overextensions made by consumers. Lower interest may expand the debt to income ratio which currently resides near record highs at 165%. A shift in debt financed purchases can already be seen; car sales reached a record level (1.85 million units) in 2014 and are expected to be sustained in 2015. Furthermore, any additional debt borrowing for homes may add insult to injury in a housing market already thought to be overvalued; the estimates range from 10% (Canada Mortgage and Housing Corporation) to 30% (The Economist).

In addition to lowering their interest rate, the BoC dropped their growth forecast for the first half of 2015 to 1.5% from 2.4%—a common theme globally. Now the question remains, will the reversal from a rate hike bias to a rate cut spread? Possible subjects include the BoE (whose 2 hawks dropped the campaign for rate hikes this month) and the RBA. The later institution will have to decide on February 4th whether their fundamental position, regarding commodity exports and inflation, is similar enough to Canada to facilitate a rate cut. 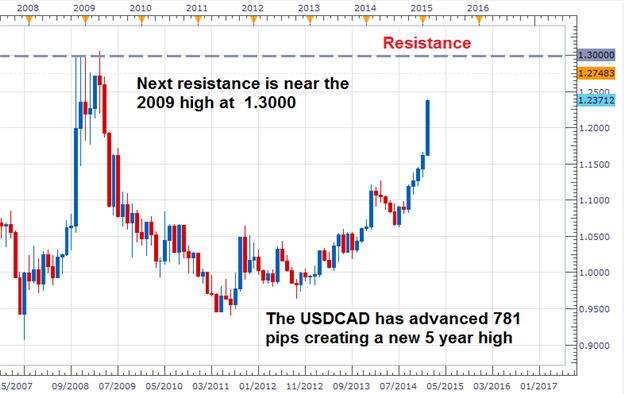