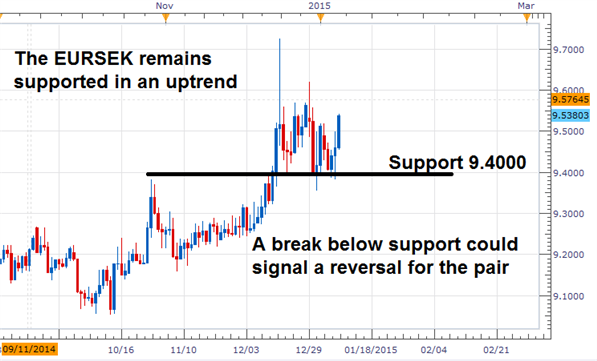 Minutes of the Riksbank Monetary Policy Meeting were riddled with expansionary rhetoric. The executive board held the repo rate at zero with the foregone conclusion that rates needed to remain there through the second half of 2016—longer than originally assessed in October’s report. Yet despite the board’s efforts to keep the inflation target as the benchmark for price-setting and wage-formation, the renewed zero rate has done little to excel industrial and service production.

As noted by First Deputy Governor Kerstin Jochnick, the more than 40% drop in the price of oil since June has generated opposing effects; while aiding consumption among importing nations it has left overall global inflation subdued. Expanded upon by Deputy Governor Per Jansson, Swedish inflation expectations for 5 years out have fallen in December to 1.72 from 1.85. These complementary effects are reflected in November’s production activity.

Industrial production decreased by 5% year-over-year, 1.3% in the three months September-November and 0.2% month-over-month. The greatest yearly production decline came from the computer and electrical industry (-33.6%) which was partially offset by an increase in the refined petroleum industry (37%). The greatest monthly influence came again from a decline in computer and electrical products (-14%) while an increase in non-metallic mineral products (13.5%) slowed the index’s drop. Industrial orders also contracted by 1.1% in November when compared to December.

Service Production, when adjusted for volume and working day modifications, increased 3.4% year-over-year and 1.0% month-over-month. The greatest developments came from wholesale trade (excluding motor vehicles) which grew by 4.8 and 5.9 percent respectively. The 3 month span from September to November also increased 1.1% due to advances in computer programming (4.7%) and information/ communications (4.4%). Growth in this category was stemmed by a drop in education (-1.1%).