Uncertainty regarding the domestic and global economic outlook has tainted the most recent view of business confidence. Sluggish GDP growth (1.4%) and a decline in exports (-6.0%) paired with a strong USdollar and unsteady financial markets have left the South African Chamber of Commerce and Industry Business Confidence Index down 2.5 points.

Electricity consumption, by volume, decreased in November by 0.9% (m/m) and 0.8% (y/y). When added to the years running total, electricity consumption was down by 0.6 percent. Decreasing with greater magnitude, electricity production fell by 1.2% (m/m) and 2.0% (y/y). Year-to-date this makes for a 1.4% drop in production. Further magnifying the loss, exports of electricity sold outside South Africa decreased by 2.3% (y/y) or by 28 gigawatt-hours. This mismatch between supply and demand has created widespread implications for business activity. With ever changing reserve requirements, an insufficient electrical supply has left South Africa subject to load shedding—the point at which reserve power cannot fill the gaps resulting from technical/maintenance issues or times of peak demand.

This reduction in output and its negative impact on business activity is reflective of the overall subdued economic state. The SACCI Index fell by 2.5 index points in December. With no consecutive upward movement among sub-indices, the index dropped from 90.8 to 88.3. Year-over-year this places the index 1.7 points below 2014’s average of 90.0, 3.6 points under that of December 2013, and 33.8 points below the 2006 pre-recession high of 122.1. The largest negative influence was a weak rand; it prevented South Africa from capitalizing on the benefits of lower US denominated oil prices.

A reduced manufacturing PMI has further contributed to the retreating business confidence. At 50.2 PMI reached a five month low in December. Contributing to the decline, a drop in new orders and output which account for 30 and 25 percent of the 5 component weighted index. This is the first contraction for these two components since July. Further influence came from cost inflation in the private sector which slowed to its lowest level in 3.5 years. 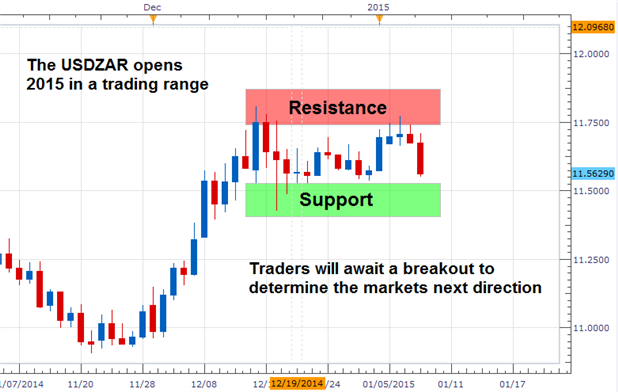