The State of Crude, Equities and Greece Sends Gold to 3 Week High

In seeking a safe haven asset, investors pushed the price of gold up to a three week high yesterday. Driving the demand: global deflation, political uncertainty, and equity price declines. Today however, the upcoming release of the FOMC’s minutes has given the metal reason to pause.

At present the Euro has reached a new low against the USdollar in the wake of yesterday’s CPI release. Registering 0.2% below its December 2013 level, the headline figure—negative for the first time in 5 years—could be labeled as deflation if it induces a fall in consumer and producer price expectations and in turn reduces their spending. With slowed growth further magnified by disappointing manufacturing and services PMI data, pressure is building for the Eurozone to implement further stimulus measures. Ahead of their next MPC meeting on January 22nd, some investors are thus looking to gold to hedge against uncertainty.

Lending a further reason to hedge, the political turmoil in Greece. To secure international aid amidst their financial crisis, Greece agreed to adhere to austerity measures aimed at increasing tax revenue and decreasing government spending. The policies however have become increasingly unpopular, culminating in a snap election to take place on January 25th. If the opposition party wins, Greece may exit the Eurozone and repeal the austerity measures. While the chances of an exit are minimal, the mere possibility of a large euro deposit withdraw has provided enough reason for investors to shift resources into a more stable asset such as gold.

Outside of the Eurozone, a flight to quality may have also been induced by the descent of oil and its effect on equity prices. For the first time since 2009, US oil started the week with a drop below $50 a barrel. A US supply cut is unlikely to boost prices in the immediate future as oil companies have debts to service. The fall in the commodity’s price, thus led the drop in the US30 which closed 173 points lower yesterday and S&P 500 which traded below 2000.

When paired with a stronger dollar, lower oil prices have limited the room to increase borrowing costs and have thus once again brought the speculation of when the US will raise interest rates to the forefront. While the Fed’s initial statement was balanced, any nuances in their upcoming release could impact the value of the dollar and consequently the price of gold. 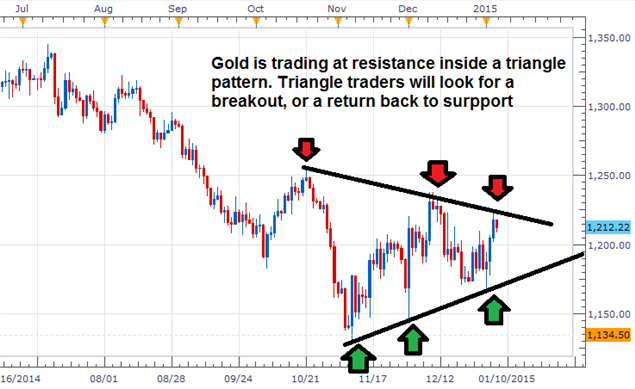