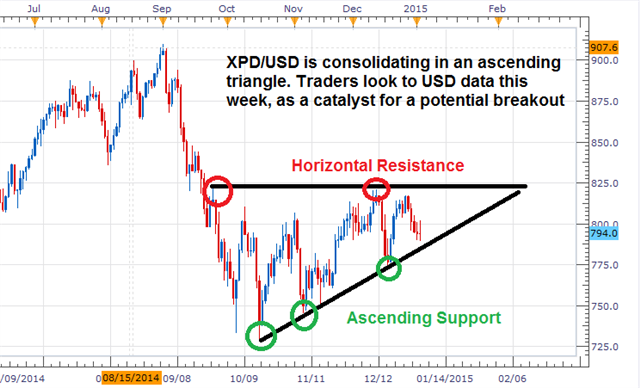 The latest figures reported by the automobile associations representing the world’s leading consumer car markets indicate an overall decline in sales for the month of November. While U.S. auto dealers were able to capitalize on favorable domestic conditions, sales data remained bleak in China, Japan and Germany, which combined account for 37 percent of global sales. Given that the automobile industry consumes 67% of the metal’s supply, this diverging data has left palladium consolidating within an ascending triangle.

As reported by the Chinese Association of Automobile Manufactures, the cumulative sales and production of automobiles continued to fall in China, home to the world’s largest economy. While production and sales increased year-over-year by 1.2 and 2.3 percent respectively, the rate of growth declined by 7.1 and 7.4 percent respectively. Furthermore, as of November auto exports were reportedly down 15.6% on the year, with a 23.7% decline in passenger vehicles leading the way.

Additionally as reported by the Federal Motor Transport Authority (KBA), new passenger car registrations fell 1.8% in Germany, Europe’s largest market. The largest negative impact for November came from domestic sales which fell by 2.2% and account for 63.8% of the total market.

In contrast to the previous assessments, the United States and Canada exhibited growth, capitalizing on holiday spending and lower oil prices. November sales reached 17.2 million units in the United States, 5% above the rate one year ago. Furthermore, according to Scotiabank annual sales in Canada remained strong at 1.85 million units, just below the record 2 million units set in the prior month.