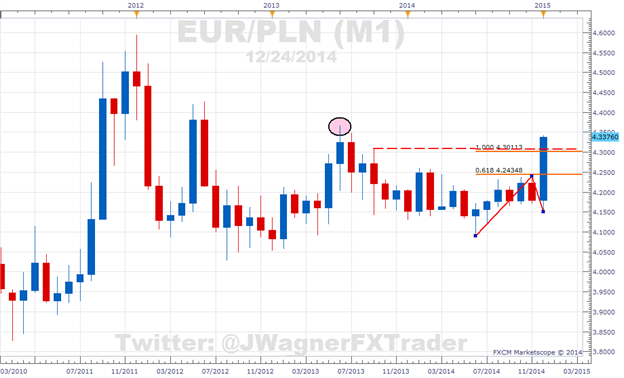 Characterized by low inflation and decelerating growth, economic conditions have not been optimal in either the Eurozone or Poland. However based on Poland’s geographic location, trading patterns, and liquidly position, of the two currencies the Zloty has faced the greatest pressure at years end. In carving out a bullish engulfing monthly candle for December of 2014, the EURPLN established its largest bullish move for a single month since May of 2012. In doing so December’s price action created a lower low before pushing 3% higher to create a higher high relative to November’s price action.

Situated between Germany and Ukraine, with a close proximity to Russia, Poland has felt pressure from both sides of the map regarding geopolitical tensions and sanctions. Krzysztof Rybinski, former deputy governor of Poland’s central bank, stated in an interview “sanctions are felt across the board, exports to Ukraine are down 25% and to Russia they’re down 10%”.While impactful in accounting for 7.5% of Polish exports, it was a slowdown in Eurozone trade that proved to be the most detrimental. Receiving over a quarter of Poland’s exports, economic stagnation in Germany contributed to Poland’s decelerated growth from 3.5% in Q2 to 3.3% in Q3. Furthermore in the absence of demand pressures CPI has remained below the target at -0.6%.

The Eurozone finds itself in a similar positon to that of Poland, facing a decline in prices, a rise in real wage costs, falling profits, and shrinking demand. However, while annual inflation remains below the target at 0.3%, GDP did expand by 0.1% in Q3. Furthermore, to combat the remaining negative inflation expectations the ECB became the first major central bank to introduce a negative deposit rate in June (-0.10%), accompanied by an adjustment in September (-0.20%). Additionally, an asset purchase program was launched, infusing liquidity into the financial system through the purchase of debt instruments. While high liquidity keeps the euro attractive as an investment, the ECB balance sheet remains shy of its EUR 1 trillion expansion goal. As such a decision will be made regarding the implementation of further measurements, namely QE, at the January 22nd rate meeting.

Thus, while Bullish engulfing candle formations can signify a change in sentiment towards the bullish side their fulfilment is not guaranteed. In this case as prices are currently resting near structural resistance at 4.31, it will be interesting to see if there is enough strength to push higher or if it will follow the path taken during the summer of 2012—after the exchange rate increased 5% in May, the EURPLN gave back 4% of that increase a month later in June.